South Gobi On The Move

Investing is about indentifying trends before others do and capitalizing upon them. You don’t need to catch the bottom or the turn. You want to find a trend already in motion and latch on with everything you have. You need a trend that can go on for years and most importantly, you need to be early. The thing about trends is that they always overshoot to the upside. As long as the trend is correct and you’re early enough, the trend will bail you out of your mistakes. The trick is to buy the best assets in the industry. You are never going to buy the absolute lows. The best assets will move first. Buy those. Don’t be a value investor playing catch-up with second tier assets. The best assets will dominate the industry. Focus on those.

Throughout the last decade, I have been successful at doing this. I got into gold at $330. It took me some time to figure out what assets I wanted, but by $380, I had a good basket of companies. I’ve been on this trend for seven years now. It isn’t ending any time soon. After overshooting, mining assets have moved sideways for years—they’re cheap again. The same goes for silver. I got involved when silver was $4. I had my Pan American Silver (PAAS: Nasdaq) appreciate 6-fold before I sold it (thanks Fleck). I watched my Western Silver go up ten-fold before it eventually turned into Glamis. I still have thousands of ounces of silver bullion. Even that is up 5-fold. You buy the best assets in a trend—even if they’re expensive on current metrics. If you had bought the cheap stock, you’d own a bunch of Coeur D’Alene (CDE: AMEX). Yuck!

I was ungodly early on Uranium. I bought my first shares when uranium traded for $12/lb. At the time, there wasn’t much to choose from. I bought all 9 publicly traded companies and held on for the ride of my life. A few were duds, but most went up at least 10-fold. One even went up 30-fold. I unfortunately sold out too soon. My companies had overshot the fundamentals and I knew it. A year later, they came crashing back to earth. They are still grinding lower. The price of uranium is now $46, down from $136 at the peak. The trend is still viable and I know I need to revisit this 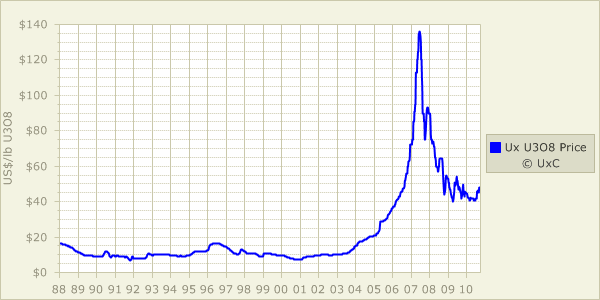 I’m early on mining services. Large mining companies are just now realizing what I have known since early 2007—as an industry, they have depleted more than they have discovered for at least twenty years. The elephant mines in the industry are running out and there haven’t been many sizable new discoveries. The majors bet big on the juniors finding something. They didn’t find much. Now the majors are scrambling to overpay for what few good assets exist in the world. There is about to be a massive boom in exploration—the majors have no choice. I started with six companies in the mining services industry and after getting to know them all; I have narrowed it down to the two. I think that 2011 is the year that I am vindicated. The good thing about being early is that I have been able to sit on the bid and become the largest shareholder of each of these businesses.

Sometimes, you cannot figure out how to play the trends you see. I have been a long term believer in agricultural commodities. I spent two years trying to find an intelligent way to invest in the industry. I owned equipment makers and fertilizer companies. I even owned a company doing GPS for tractors. I tried everything, but it never felt right. Agricultural prices will go much higher over time. Farmers will have a whole lot more disposable income, but I have relegated myself to the fact that I will not make any money off this trend.

Sometimes, you get scared out. I spent three weeks in West Africa. The economy in Ghana is booming. The Burkina Faso economy will soon boom as a few large mines come online. In Ivory Coast, they decided to put down their guns and end a civil war. Their economy will also boom. I wanted to go and play it. I bought into the Ghana stock exchange, but I didn’t really put my mind into it. It seemed too distant and too chaotic. Nearly dying in Ivory Coast didn’t endear me to the place either. West Africa felt like it was seconds from anarchy. I think it will be a boom, but it was too scary to put real money to work.

Sometimes, I have just been too early on a trend. Starting in late 2005, I saw the housing bubble for what it was. I live in Miami—it was obvious that this would be a disaster. I shorted all the home builders. I shorted Fannie Mae and Bear Stearns. I was a huge short in Lehman—it just looked like a fraud to me. I was short CountryWide and AmeriCredit. I heard there was a company that guaranteed mortgages—MGIC Investment Corp (MTG: NYSE). You can be sure that I was short globs of that. Unfortunately, companies can go higher before they collapse. I got run over on some of these. I saw my puts go off to put heaven each quarter. Finally, I analyzed my results for 2006 and 2007. I was up over 100% each year on my longs and I gave back a good chunk of my gains on the shorts. Forget it. I no longer short. It’s too hard. I got it right conceptually, but only lost money. You can be early on the long side and nothing happens. If you are early on the short side, you will get hurt.

Sometimes, it pays to ride the trend when you have a hiccup. The accumulation of political power in Washington DC feels unstoppable. Following the terrorist attacks on 9/11, small regional hotel stocks collapsed. Many were down 70% or more. Some looked like they could go insolvent. I focused on a few that were clustered in the downtown Washington DC area. People were scared to visit the capital—for good reason. However, I knew enough about politics. Eventually, lobbyists would flock back to the capital like flies to poo. I kept buying as these shares dropped. I made friends with the reception ladies at a number of hotels. I’d call once a week and they’d tell me how bookings looked. 10% occupancy is a disaster. When I saw the turn, I bought the snot out of these stocks. Not only did they return to their prior highs within two years, they then exceeded those highs by large amounts. I had huge gains but, as always, I sold too soon.

I can go on and on. The key is to find a trend. Spend time to make sure you are correct. Buy the best assets as long as the prices are reasonable. Then make sure you don’t get shaken out. I always sell these trends too soon. I forget that they always overshoot. I am not about to complain though. In a decade where the market has gone nowhere, I’ve made well over 100-fold on my investments—isn’t compounding exhilarating? Clearly, there’s something to this trend investing.

The funny thing about these trends is that I have looked at hundreds of potential trends over the years. Usually I print out some materials. Maybe I visit a few trade shows. Eventually, I just get bored. It’s not that dental equipment is dull; it’s just that I slowly realize that it isn’t a trend with enough momentum for me. I know myself. I’m excited when I can feel something that is about to go parabolic. When I really feel like I’m onto something, it’s intoxicating—I cannot sleep. I cannot think of one of these trends where I felt this way and then got it wrong.

I got back from Mongolia a month ago. I cannot get it out of my mind. Gold is up $150 since I got back. That’s boring. Will bonds collapse or yield one basis point? I don’t know or care. The normal minutiae of investing cannot hold my attention any longer. Until I figure out Mongolia, everything else can wait. So far, I’ve put some money in a savings account to play the local currency. I bought a few shares on the exchange. There’s nothing like waking up in the morning to learn that over night, you executed a combined 19 shares in three different companies valued at $115. I’m not going to make big money investing on the exchange—I cannot get any money to work. I am back in Mongolia because I want to see if there are other ways to play the coming boom. I spent two weeks looking at public companies. That isn’t the way to play it. Now I am broadening my horizons.

I’ve been on these crazy odysseys in the past. I remember when I Googled uranium investing and nothing popped up. Most information on the industry was classified. Out of desperation, I started cold calling nuclear power plants and uranium mines looking for information. I’m sure I’m still on some terrorist watch list because of it. There was no way to play uranium oxide itself, but I played a basket of explorers and figured it out over time. I sold the duds and focused on the winners. I don’t yet have a plan on Mongolia. I hope that I’ll figure it out on the fly. You never know when that epiphany will strike. Investor, Jordan Calonego is here with me. He thinks I’m right about my quest for the perfect Mongolian asset.  We’ve chosen to take our womenfolk in the hope that they will have the special insight that five finance guys lacked on our last trip. Thus it begins… Mongolia redux.