Coup d’Etat: A Practical Handbook by Edward Luttwak is one of those great books that you can read repeatedly and learn something new each time. Clearly, I’m not in the business of staging a coup against anything. Rather, I appreciate the intellectual purity of contemplating such an abstract concept. The permutations and divergent courses you can take in your ambition only add to the complexity of such a subject. In business, the more templates you can mentally construct, the better you can navigate difficult situations. This is one of those books that I have chronically dog-eared over the years. It’s all in there. Divide and conquer? Go for the jugular? Risk it all on a roll of the dice? How would you play your hand? It’s the making of many late night conversations amongst friends. 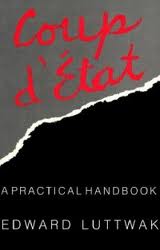 Incidentally, I am not the only one to find this book of such value. The book has become the de factohandbook for overthrowing a ruler and has been found amongst the belongings of many failed conspirators. It has also been attributed to success by those who have been victorious. In the three decades since it was written, the world has changed. No longer are we concerned with one faction of the military overthrowing another. Suddenly, hordes of un-armed teenagers with little more than rocks and twitter accounts are overthrowing the generation of leaders who came to power with Luttwak’s manual. Is it time for a new handbook? Luttwak spends a good deal of time discussing the defenses against a traditional coup. How do you defend against the current generation of coups?

To start with, the current generation of coups isn’t about one party taking power from another. It is about something bigger; it is about the people taking power for themselves. It is a rejection of the old model where a few wealthy families control everyone else. This is a storming of the Bastille, not a fight between Mobutu and Kabila. It isn’t so much a coup as a rebellion against thugs. If you intend to stay in power, you need to act before the rebellion starts—afterwards, it becomes nearly impossible. The masses have always had an affinity for bread and circuses. Clearly that’s where you start—keep the people happy. If you’ve looted your country for a generation, give something back. If you have to flee, you can’t take it all with you anyway. Make noises about democracy. Extend and pretend. A rump parliament achieves such a goal. Have a vote about something inconsequential. Make it seem like you care about the people. Shower the people with gifts. The days of uniting your people against a common external enemy are over. No one cares about the ‘Great Satan’ when they are hungry. Food subsidies? Sure. Why not just give food away? Don’t give people a reason to protest.

Most importantly, make sure you retain the support of America. America doesn’t want to lose relationships that took decades of bribery to foster. Crushing democracy movements while claiming you are fighting terrorism plays well here. Once people are in the streets, they’re no longer terrorists—they’re freedom fighters, tailor made for 30 second sound-bites on cable television. If that happens, America will pretend that they never supported you in the first place. Then what? 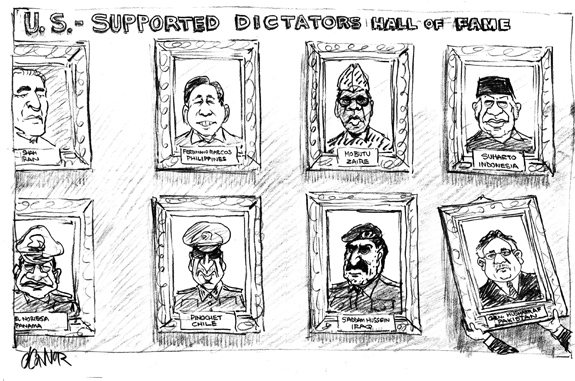 Here’s the dilemma; your capital city is full of peaceful protestors who want you to step down. Do you do it? Is all hope lost? If you go peacefully, your Swiss bank accounts will be safe. You may still be father to your country—a mascot that they trot out for national holidays. Or, the new guy may go after you with a vengeance. Promises made when you are still in power, become worthless once you abandon the reigns. Can you trust the opposition? What do they really want? Maybe it’s worth it to be marginalized, if they let you keep your life and your billions. Or maybe you have no choice—fight to the last breath.

This is the key decision. Once you forcefully disburse the protestors, all sense of legitimacy is lost. You can bargain with them, or you can attack. Egypt chose the latter. First they went after the internet; then they called in the special police. Every step of escalation led to an escalation on the other side. Is there a better method? Can reconciliation work? As soon as the shooting starts, there is no going back. 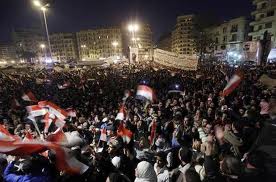 What about the Gaddafi plan? He prepared for a siege early. He hired mercenaries and stockpiled munitions. He’s lost the support of America and half his country. The other half seems to be smoldering. Was that the best option? What is the correct plan? Can you massacre your own people and still stay in power?

Will Gaddafi stay in power? Will any of the aging leaders? How did Mugabe hold on so long? Why couldn’t Mubarak? I don’t have answers to these questions. It’s time for another Luttwak book. Coup d’Etat: Surviving The Backlash From The Masses. The thesis would be that once the ball gets rolling, it’s all over. Conceding a little is better than losing everything. Violence isn’t the answer—not with 24 hour news coverage. Better governance is the best solution. Loot a little; leave something for your people. Old leadership classes can become entrenched and incapable of understanding these points.

For investors, what does this all mean?  Watch out for corrupt regimes. In the past, you could ignore this risk. America always propped up its cronies. Now, maybe we don’t. During a revolution, the rules of commerce are suspended. Ownership of key assets can change abruptly. You cannot hit the bid once the riots start. Make sure you know what the real story is in the country you are doing business in. Just because some thugs claim to be ‘pro business,’ that doesn’t mean that the opposition will continue that policy. Just because someone seems popular, that doesn’t mean that he actually is. Like everything in investing, boots on the ground research is essential. There is no substitute. You cannot read Western papers and get the same understanding. There is a reason that I spend most of my time on the road. It is the only way to do real research. The Western educated leadership class will always have similar opinions. Go to the local markets and find out what the average guy thinks. Talk to your cab driver, meet people at bars. Otherwise, you will never know when a bit of resentment turns into outright rage. Once the riots start, it seems very hard to contain them. Markets hate uncertainty.