Get Ready To Buy ‘Em…

For months now, I’ve been waiting for QE3. I know it is coming. I just don’t know when. Yesterday, we got one step closer. Right now, there is no political will for more money printing. The average voter realizes that printing money does nothing but raise his living costs through inflation, while helping out a small subset of the Wall Street population who likes to gamble on pieces of paper. In order for the Fed to print more money, you need a real crisis in the financial markets. You need something that scares people and makes them think the world is ending. That way, printing money is the only way to save the economy. Yesterday was as fierce of a down day as I can remember in the markets. You only need a few more days like it for Ben Bernanke to launch the helicopters again.

To a man with a hammer, every problem looks like a nail. Bernanke wants to print money—I think he is about to get his chance, and to make it palatable, he needs to see the market crash. We are somewhere in the process of witnessing this crash. No one can know where it will bottom. I have had a sizable cash position for months now. I have been waiting to for the right moment to buy. Yesterday, near the close, I bought a few things. Mostly, I bought large cap gold mining shares. I sure hope for lower prices to buy more. 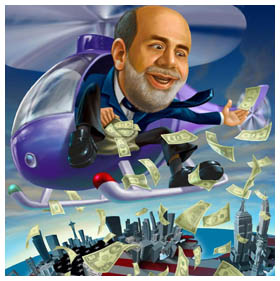 Back in May, I bought some silver into the collapse. I felt that it was oversold and was due for a pop. I didn’t quite get the lows and I certainly didn’t sell near the highs, but I got a juicy piece of the middle of the bounce. A similar situation is setting up in the broader markets. We’re oversold and due for a bounce. I can’t fault someone for playing it with S&P futures, or any other asset class. Personally though, I’m buying large cap gold miners for this pop—with the view that I may just get lucky and catch the first hint of QE3 from Bernanke.

For a quick primer on gold mining—it’s the worst business imaginable. Every miner out there has seen huge cost increases for years. Despite gold going higher for each of the last 11 years, most mining shares are roughly unchanged for the past five years. There is a lot of catch-up to do and good analysts like John Doody show the spread between gold and the miners approaching historically wide levels. Of course, this can continue for some time, but I think we are about to see some mean-reversion. The difference now is that gold has continued to go higher while costs aren’t going up as quickly.

I’m not playing the miners for a long term investment; I’m trying to catch the spike that has preceded the last two announcements of money printing. It just so happens that the seasonals for gold are quite attractive as well. Finally, many of these companies have seen their shares get clobbered in the last few days.

I have a large cash position. I need to make it work for me. Buying into market collapses is a good way of at least generating some returns—with a bit of risk as well. Same rules as the silver trade apply. Make sure it’s an asset that you don’t mind owning if you’re too early, buy small, buy more if it drops, don’t use leverage and don’t be greedy. I want a full position for when QE3 is announced. I have a core position that I don’t sell. I want an extra helping for a trading position and now I’m starting to average into that position.