I apologize in advance for posting a currency piece on this site. The Mongolian Togrog is illiquid and difficult to acquire, but it is the first currency that I’ve seen that has the potential to double or triple in price over the next decade. While you wait, you make around 15% in interest. If you know anything about carry-trading, you’ll probably find a way to finance it with Yen and be the hero of your prop desk. Of course, there’s some leg-work involved, but that’s why you get paid the big bucks in finance. Before I go into the how, let’s talk about why anyone would want to own Togrog (please see my prior piece on BDSec Securities BDS MO). I have updated some of the following data from that piece.

Mongolia is a landlocked nation sandwiched between Russia and China. There are roughly 2.7 million people with over a million of them located in the capital city of Ulaanbaatar. 2010 GDP is estimated to be a bit over USD $5 billion, or about USD $2,000 a person. While livestock has been the majority of the economy for millennia, that is suddenly about to change. It just so happens that Mongolia is quite rich in mineral resources, and those resources are about to be mined. 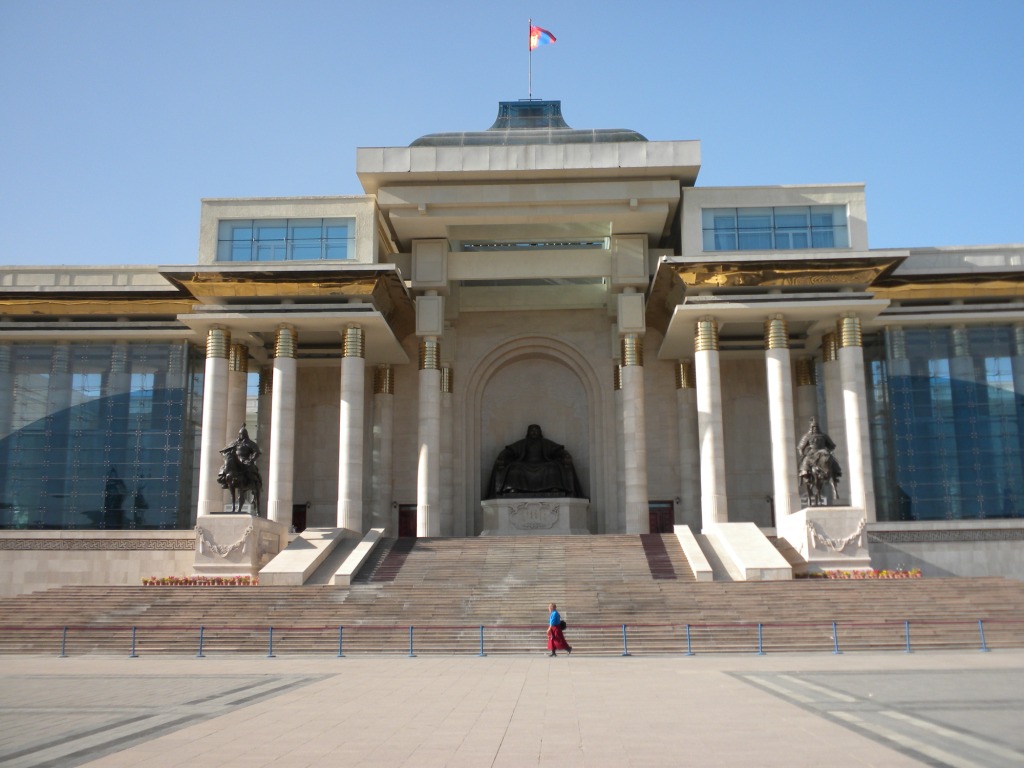 In 2009, the government agreed to change the tax law and adjust the excess profits tax that was thwarting mine development. Almost immediately, Ivanhoe (IVN: NYSE) agreed to go ahead with their massive Oyu Tolgoi (OT) copper mine. When complete, it will be one of the largest copper mines in the world. Current cap-ex is estimated to be more than USD $7 billion and the mine is expected to produce roughly $7 billion a year in metal (making this single mine larger than the entire economy). It is widely assumed that Ivanhoe will push ahead with multiple expansion phases from there.

In the next few months, the government will agree to a final tender offer for a joint venture on the Tavan Tolgoi coking coal mine. This is the largest un-mined coking coal asset in the world. Cap-ex will be in the billions with exports of coal targeted in the billions as well.

There are a few dozen major mining projects in various stages of feasibility and a similar number of infrastructure projects planned. In total, we’re looking at $30 to $50 billion of capital that plans to be invested in mining and infrastructure in Mongolia. In 2010, Mongolia exported roughly $2 billion in minerals. By the end of the decade, this number is expected to grow to somewhere between $20 and $80 billion depending on commodity prices and the speed that various assets ramp up. 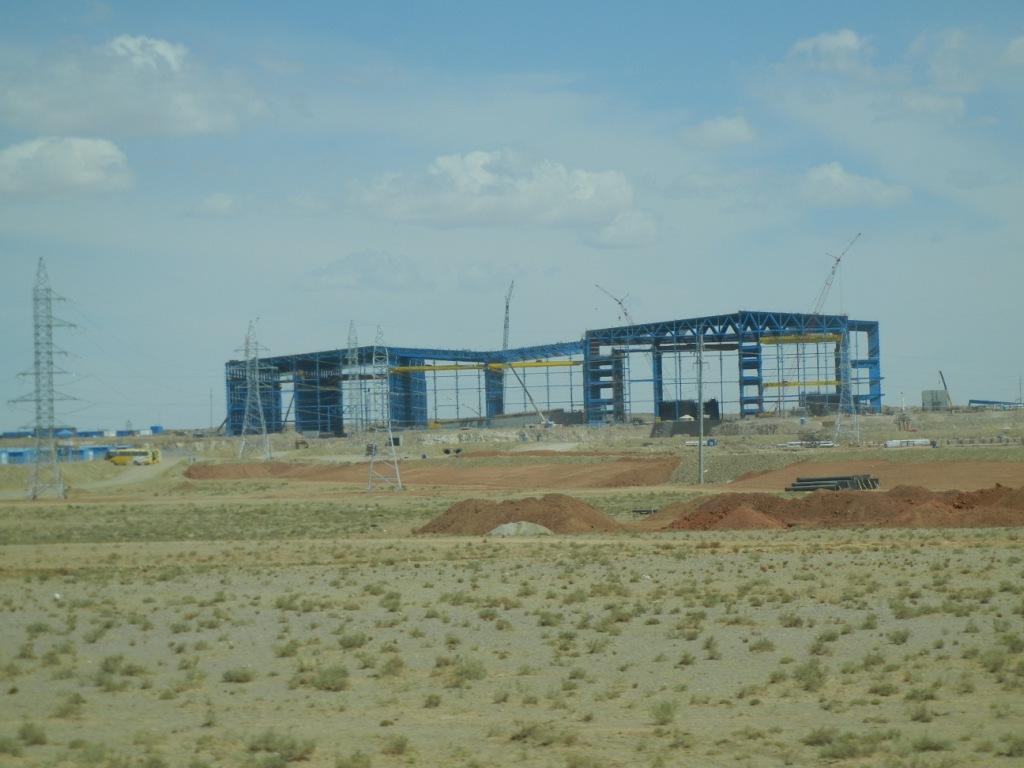 I hope you get the point. By removing the excess profits tax, Mongolia is now able to take advantage of the bull market in commodities and its proximity to China. It never really made sense before to mine coal in Australia, ship it to a port, load it on a ship and move it a few thousand miles to China. It’s much more logical to mine it on the Chinese border and ship it 200 miles by train to China. The boom in Mongolia is imminent. Clearly, some of the projects already announced will not be completed, some will not even be funded, but looking at the more probable ones, you get a cap-ex number of USD $30-$50 billion in the next decade.

So, those are the macro reasons for the currency to appreciate. You will have a world with minimal growth and Mongolian GDP growing at some rate between 25% and 100% a year for years into the future. Clearly, the oasis of growth will see its currency strengthen-or at least, that’s the historical precedent.

So here’s my question; how do you shove that much cap-ex into an economy that is a tiny fraction that size? I don’t know, but I cannot imagine the Togrog not being forced higher as everyone scrambles for local currency to pay workers and contractors.

In fact, that is already happening. In the past year, the central bank has had to sterilize over a billion dollars of inflows (a 60% increase in Central Bank holdings of dollars) in order to stop the Togrog from going nearly vertical. The central bank has repeatedly said that they do not want to stop the currency from appreciating-rather, they want to make sure that it does not do it in a volatile and unpredictable way. That’s Central Bankerspeak for “our currency is going higher-much higher.”

Over the years, I’ve had a lot of success investing in currencies by asking myself two questions. Is the government doing the right things to promote growth while at the same time balancing the budget? In the case of Mongolia, this is clearly the case. The growth is parabolic and it is one of the only countries in the world with a budget surplus (2% in the first half of the year). I then ask myself if this is “priced in?” By priced in, I mean; is it cheap to eat dinner, drink a beer and buy the other necessities of life. In the case of Mongolia, it’s VERY cheap. I have lived most of the past 9 months of my life in the capital of Ulaanbaatar. It’s roughly a third to half of the price of a similarly sized city in the US, and I find the US to be rather cheap when compared to most other countries.

Here’s the fascinating part, the central bank is trying to ensure that there is not a credit bubble on top of the rapid growth in mining investment. The Central Bank rate is 12.25%, but most banks will pay you about 15% on 1-year CDs because they then go and lend money out to quality borrowers at 25% a year. Let’s just say that in a world with no yield, these are very attractive rates.

Since the 2009 peak at around 1600, the Togrog appreciated to 1200 in early 2011. It recently declined to 1306 and that creates an opportunity. Why did it drop? To start with, all the commodity currencies were recently hit as people have begun to worry about global growth. More substantially, a small contingent of the parliament began making noises about renegotiating the Oyu Tolgoi tax agreements to give Mongolia a larger stake in the future profits. This clearly scared foreign investors who do not understand that there’s an election in June and this is simply political posturing. The government has since re-affirmed their stability agreement with Oyu Tolgoi, but the Togrog is still a bit ‘wounded.’ 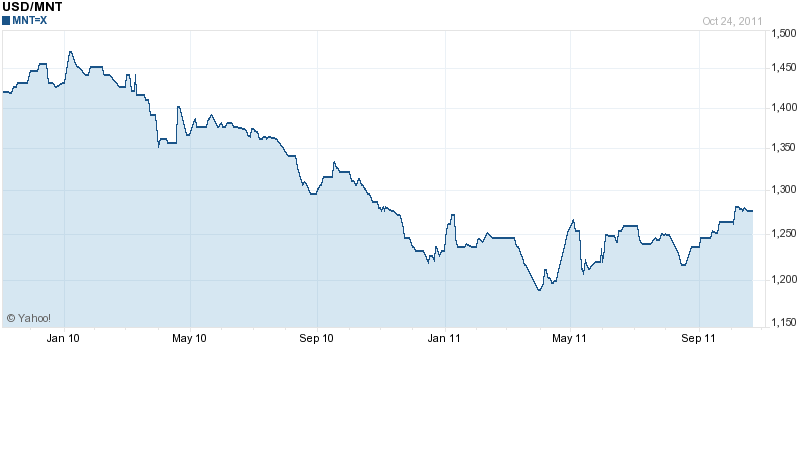 (Kuppy Note: I realize this chart is a month old. I can’t find anything more up to date that I can cut/paste to AIC)

How do you put the ‘trade’ on? The best way that I know of is to walk into any bank in Mongolia and ask for their CD rates. Then wire some money into your account and get a 1-year CD. (If you could just call up your broker and buy it on Globex, it would be all arbed out by now. Then again, Mongolia is a beautiful country worthy of a vacation.)The three largest banks are Khan Bank, Golomt and Trade and Development Bank. Each bank has English language websites and annual reports that are audited by well-known firms. They all appear overcapitalized and from my conversations with locals, I hear that they’re relatively conservatively run. Of course, depending on the bank, you can probably open accounts from overseas, but what’s the fun of that?

So, what could go wrong? The biggest risk is political. China and Russia each want a stake in the boom going on in Mongolia. My guess is that they both become significant investors in the process, but that they don’t go the next step and ‘send in the tanks.’ The second risk is that the government does something silly and upsets the growth by raising taxes on the mining sector. They tried that already once and I hope they’ve learned their lesson. The other risk is a global slow-down. However, the largest projects like Oyu Tolgoi are funded to completion. No matter what happens in any country (China) that is supposed to blow up, you have a clear window over the next few years where GDP will at least triple. Will it go up ten times? That is hard to predict, but the triple is easy. What other economy can you say such a thing about?

After that, you still have the growth as Australia is disintermediated from the coal and iron ore businesses. Did I mention that Mongolia has oil and natural gas too? It sort of just keeps going on. There’s a lot of growth coming…

In summary, the Togrog will likely go higher with the broader Mongolian economy. If nothing else, it’s one of the best managed currencies out there and they pay you around 15% to wait and own the currency. I own a bunch personally and am very content.

Disclosure: I personally own Togrog as do companies that I am associated with. I may buy or sell Togrog at any time. Please do your own due diligence. This is not a recommendation to buy or sell anything.