No Sense In Trying To Make A Few Extra Cents…

My Soap Box… (Sorry For Politics)

In investing, you don’t make the big money by buying cheap stocks—frequently, these things destroy your capital. The market always pays for growth and in a no growth world, you must look further afield for new themes. Unfortunately, many of the best themes are priced for this growth. Who doesn’t realize that the US population is rapidly aging? Or that technology will race ahead? You need to discover unknown themes—the small esoteric ones that people aren’t paying attention to.

I see two places full of growth; the small rapidly growing countries that are largely immune to what happens in the over-leveraged markets of the Western World and the obscure themes that no one really talks about yet. Until a theme goes mainstream, the valuations tend to be reasonable—sometimes even cheap. Meanwhile, you get huge growth potential.

A mine is a depleting asset. From the day you start mining, your reserves decrease and you are forced to constantly find new reserves. Of course, you can put this off for a while, sometimes for decades, but eventually, if you don’t find more reserves, you don’t have a mine. 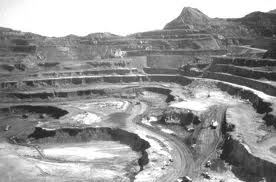 Let’s look at just one commodity; gold. In very broad numbers, the industry mines 80 million ounces of gold a year and the average cost to discover an ounce is $100. This would imply that the industry should be spending $8 billion a year just to run in place producing 80 million ounces a year. Unfortunately, for the industry, they have substantially underspent for the past twenty years. Partly, this is because the miners have been focused on quarterly earnings as opposed to growing sustainable businesses and partly this is because the price of gold has rarely been much higher than the cost of production in the first place. This means that the industry has a whole has been depleting their reserves of gold.

2011 will be the first year in two decades that the industry has spent roughly $8 billion on gold exploration. That sounds like a lot, but in reality, it means that they’ve replaced what they mined this year. They need to catch up and replace decades worth of gold that has been mined. That would imply that the industry must spend in excess of $8 billion for years into the future. To replace the ounces of net depletion in the past twenty years, the industry must spend an incremental amount in excess of $100 billion. When you spread $100 billion out over the next decade, and you realize that the gold prospecting industry will grow from simply replacing reserves in 2011 to some number substantially higher. Now add in every other commodity that has also seen a similar lack of exploration work—gold is less than half of worldwide spending. Finally, remember that you don’t need to just replace worldwide reserves to early 1990’s levels. The world has grown a lot since then; you need to substantially INCREASE reserves to account for much higher commodity use today and into the future.

Unfortunately, many of the recent discoveries have been in politically difficult or environmentally sensitive regions—you can ignore most of them. Sizable discoveries are also becoming substantially harder to find as the low hanging fruit world-wide has already been plucked. According to Frank Holmes from US Global Investors, there were 51 copper/gold porphyrys larger than 3 million ounces discovered in the 1990s, but only 24 such discoveries in the 2000s, even though substantially more was spent looking for them. What if you now need to spend substantially more per ounce versus a few decades ago? What does that do to the exploration industry? 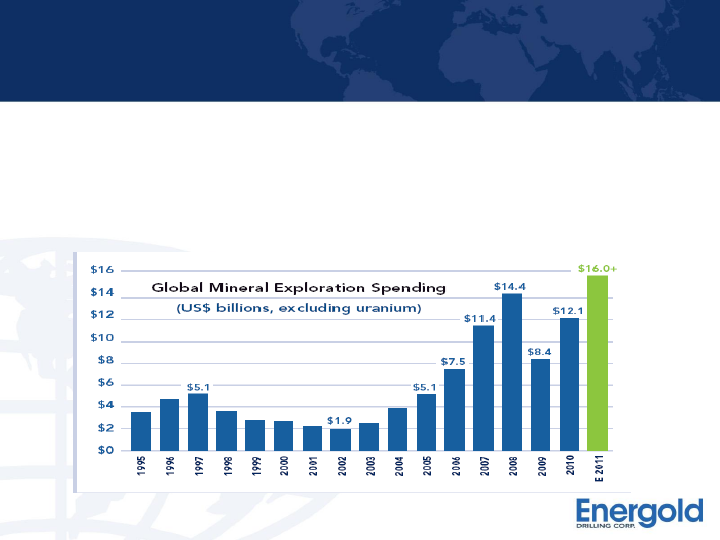 This is a chart of the last fifteen years of exploration spending. Note the bull market that began in 2003 when spending started recovering from $2 billion a year to more than $16 billion in 2011. This is a true bull market—hidden from the world. This number is going higher—much higher. My rough guess is that at the peak, it will be in excess of $50 billion a year. Naturally, there will be down years. 2009 saw producers husband their spare cash while explorers were unable to raise speculative capital. The true test of a bull market is how quickly it can recover. The inexorable trend is that miners are desperate to replace reserves—they have no choice really. 3 years from the first peak in 2008, we are at new highs. That’s the definition of a strong market.

In any bull market, you buy the best operator. You want the low cost player with the best balance sheet and the best management team. I’ve chosen my favorite, and it’s Energold (EGD: Canada). Back in 2006, I bought my first Energold shares. I think I paid 20 times earnings. I studied the competition and realized that Energold was the best. I hated paying that sort of multiple, but felt that the growth would justify it. Here we are, 5 years later and Energold has proven that it is the best. They’ve grown the rig-count by 5 times while increasing the share count by only 70%. Part of that share count increase was to build up a fortress-like balance sheet with over $2.30 a share in tangible assets. They’ve also added an equipment producer and a sizable energy services division that will help to insulate the company from swings in yearly exploration demand. During these five years, price per meter is up by 40% and new signings would indicate that it will increase by another 20% next year. Meters drilled are up by five times and drilling revenue is up more than seven times. Amazingly, you can buy all of this for about twice what I paid for my first shares five years ago. The market has ignored one of the fastest growing companies that I know of. 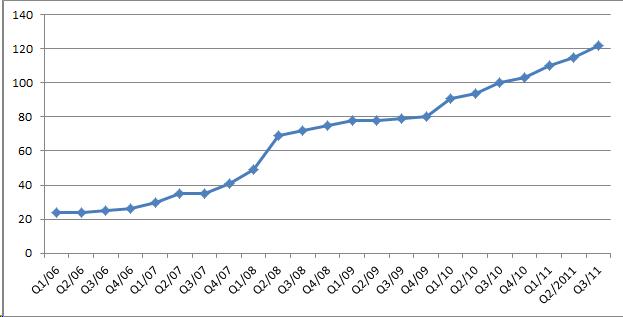 Last week, the company announced that it earned $0.20 a share for the third quarter. While there are some currency gains in there, I feel that $0.80 is a sustainable current run-rate earnings level. This would value the company at 5 times run rate earnings. I’m guessing that the company can earn in excess of $1.00 in 2012 and possibly as much as $1.25. Can this company be trading for less than 4 times earnings? What if earnings grow to nearly $2.00 by 2014? What would this be worth if it traded back to the industry leading multiple of 20 times earnings?

During the 1970’s boom in oil exploration, Schlumberger went up 17 times in 10 years. They acquired competitors and came to dominate the industry of energy exploration. It was one of the best performing stocks of that decade. I see Energold in a similar way. It will be the dominant player in hard rock exploration—a huge growth industry for this decade.

There is a unique dynamic at play today. One of the best sector bull market, meets one of the lowest priced companies out there. It’s the recipe for huge gains. This is by far my largest position and I’m stunned at the valuation. I thought that last quarter’s results would finally wake people up to the growth potential. Instead, no one cared. That won’t last too long—there are just too many smart people desperate for growth in this no growth world. Someone is going to eventually notice Energold.

Disclosure: My investment partnership is long shares of Energold. We may buy or sell shares without further notice. This is not a recommendation to do anything.