Let’s start with the most shocking fact from my visit to Mozambique; for a country with an AK-47 on its flag, it sure is peaceful. I’ve been in search of a way to adequately describe Mozambique to friends back home. Jamaica without the reefer? New Orleans without the Popeye’s? Antigua with resources? I still cannot really put my finger on it, but it’s a combination of some of my favorite countries—friendly people, great beach and even better food. Most importantly, beneath the country is one of the largest natural gas discoveries in history and this discovery has the potential to dramatically alter the future of the country.

I’m writing to you from Mozambique at the airport waiting to fly to Beira in the north and continue our tour of the country. Thus far, I struggle to understand the size of the opportunity before me—because it is so difficult to flesh out just what’s going on here. What’s reality and what’s conjecture? How large are the resources? Will the majors be willing to spend the money to target these resources? If they play their cards right, Mozambique could be one of the wealthiest countries in Africa. Unfortunately, like most of Africa, the thesis rests on sustained political stability for a country that only a generation ago killed over 1 million people in a civil war. While I’ve spent plenty of time on meetings, I’ve spent even more time enjoying the culture and taking the pulse of the people. Maputo, the capital is a party city on the ocean. A bit further north, Bilene is a proper beach community in the making. Now I’m going to Beira, a large port city. I want to see and learn more. It’s all about stability. Will Mozambique stay stable? 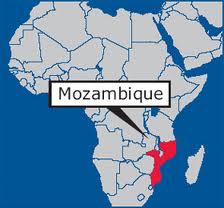 Mozambique was discovered by Portuguese explorer Vasco da Gama in 1498 and colonized in 1505. Being colonized by a poor country has many disadvantages and the Portuguese never really put much effort into doing anything with their colony. When a revolution kicked them out in 1975, most Portuguese were happy to be rid of the nuisance of governing a country in Africa. The new Mozambican government was openly Marxist and a civil war broke out between the government supported by the Soviets and the rebels which were supported by Rhodesia and South Africa. Over a million people were killed during 15 years of bloody warfare before both sides agreed to a cease fire and started to rebuild their country. With the fall of the Soviet Union, the funding dried up and Mozambique embarked on a capitalist path.

Like any country I’ve visited, I arrived with a few phone numbers, a few contacts and some travelling buddies. No matter what, the first few days are spent taking the pulse of the place. Just because the business people see things one way, that doesn’t mean that their view is universal. The best way to figure a country out is to head out to the bars and talk to the people. “Is the government doing a good job?” “Do you like your president?” “Is corruption an issue?” “What do you think the actual inflation rate is?” You never know what you’ll learn from whom. For the cost of a few beers, you can gain priceless insight. As always, cabbies and bartenders tend to know more about who’s doing what than anyone else. What I really wanted to learn was; would Mozambique screw this opportunity up? Is the country stable? What should I be worried about?

The following is something of a photo journal of my first four days in Mozambique. It was 4 days of exploration, heavy celebration—it was New Year’s after all, and intense meetings with business leaders.

I’ll follow up with a more thorough piece later in the week after I’ve had more time to collect my thoughts. 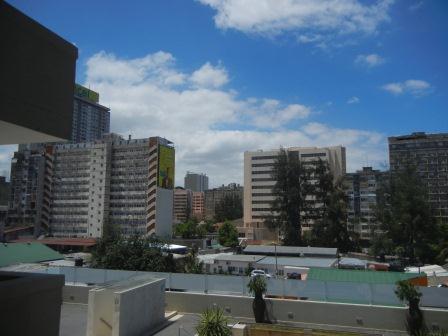 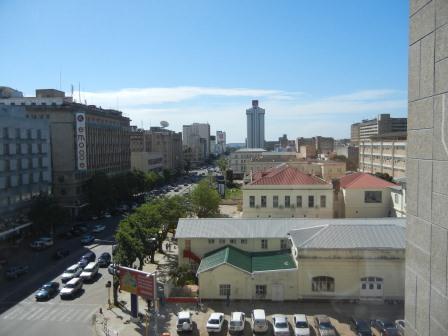 Downtown Maputo from the hotel window followed by another shot from the window of the stock exchange. 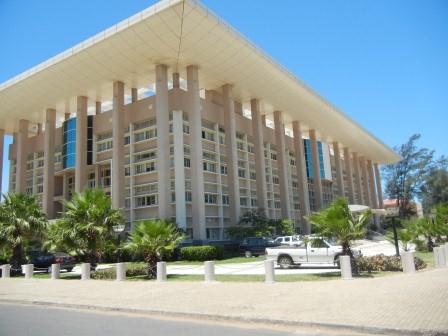 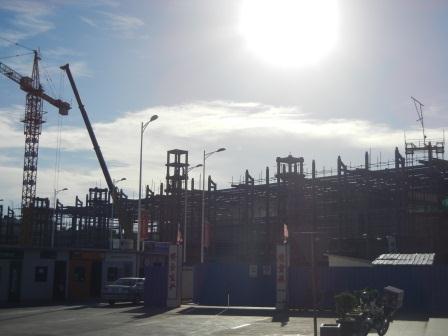 Of course, if it’s new, it’s probably built by the Chinese–like this government building or the new airport currently under construction. The Chinese are working hard to get a piece of the resource wealth of Mozambique. 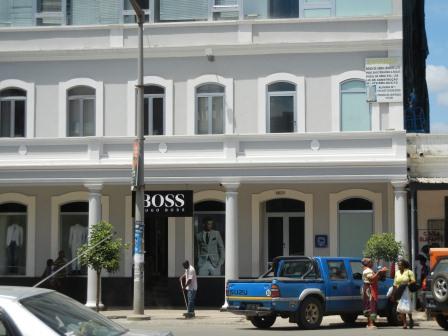 Maputo has a Hugo Boss… 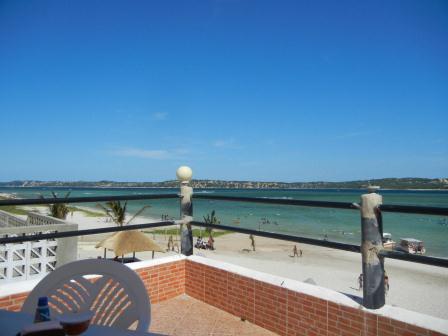 …and Bilene has beautiful beaches… 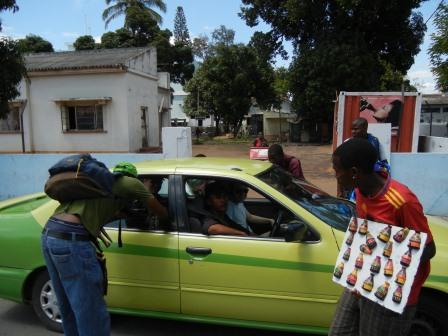 …but the secret of travel in Mozambique is; don’t stop. The peddlers will swarm you!!

Now that you’ve seen the sights, let’s talk a bit about enjoying the culture. 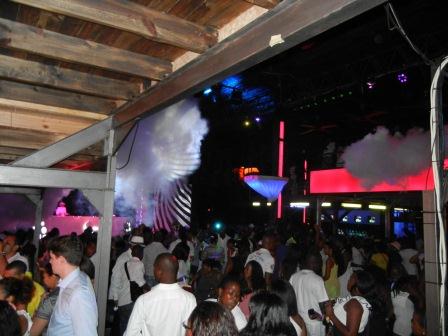 I’m not the type of guy who will miss New Year’s Eve in Maputo!! 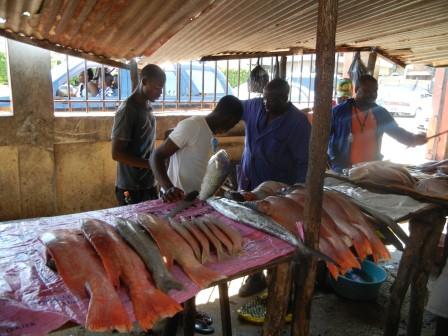 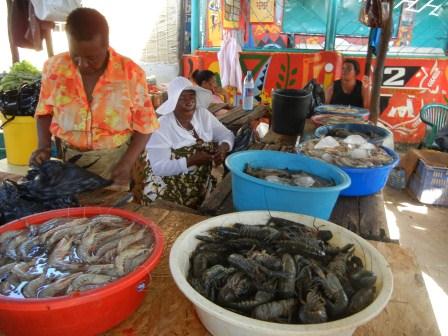 Mozambique is famous for its fresh fish and prawns. While recovering from the night before, I headed to the fish market where you can choose your seafood…. 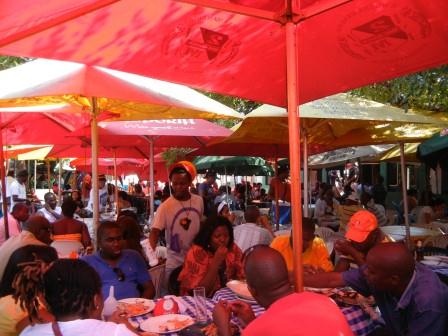 …They then grill it for you on the spot…. 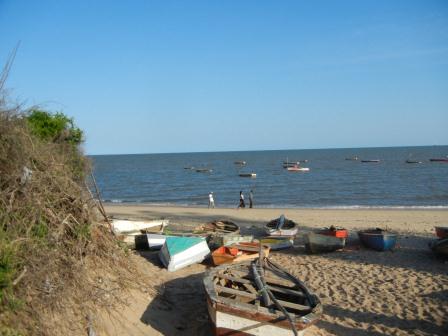 …of course you cannot have fish without fishing boats.

Actually, no matter how hard we looked, it was difficult to even find traces of the civil war…It’s long in the past already… 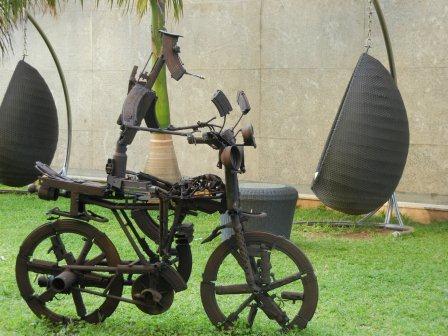 …this statue made of used AK 47 parts in our hotel garden was about as close as we could find to any expression of anything violent in Mozambique. Which brings us full circle to the flag. For such happy people, you’d think that the following would make for a more appropriate flag image… 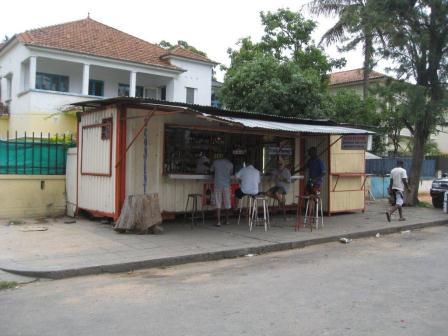