Like most countries in Africa, no one really knows the numbers in Mozambique. The government numbers are politicized, the NGO numbers completely ignore the unofficial sector—which is frequently many times the official sector, and businessmen operate by guesstimate. How many people live in Mozambique? Any number between 20 and 25 million is about as accurate as it gets. How big is the economy? The government will tell you that it’s about USD $9 billion. I didn’t encounter a businessman who thought it was smaller than USD $15 billion. For the sake of argument, let’s use the government numbers and be very skeptical about them. The key point is that it’s a country with about 20 million people and per capita income of under $500, making it one of the poorest in Africa. However, I think that this is about to change materially over the next few years.

The economy will grow because Mozambique is very rich in dozens of commodities. In particular, there are sizable coal deposits and in the next few years, exports will expand materially as new railroads are built to supply a much larger port facility being built to the north in Pemba. However, coal isn’t what got me interested in Mozambique. I went to learn about natural gas. Based on drilling done to date, ENI and Anadarko speculate that they’ve discovered 50 TCF of natural gas. Most people think that when they’re done drilling, it will come to over 200 TCF. To put that into perspective, that puts Mozambique somewhere between Libya and The UAE in total natural gas reserves.

That’s just the start. ENI has talked about building a USD $50 billion gas liquefaction facility in order to ship this gas to customers in Asia. This one facility would be five times the size of the whole Mozambican economy. I have spoken a lot about Mongolia, but the Oyu Tolgoi mine at USD $7 billion is only about twice the size of the economy when they started work on it. Since then, Mongolia has been the fastest growing economy in the world. What happens when you build something that is five times the size of the Mozambican economy?? What happens when you build lots of follow-on industries?? It seems that the Germans are building a USD $3 billion facility for nitrogen fertilizer. There are many other facilities in the planning stages. Could Mozambique become the fastest growing economy in Africa?? 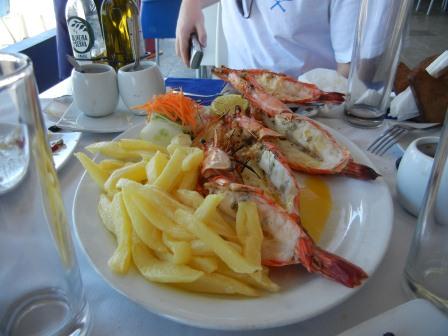 The Tiger Prawns that Mozambique is famous for….

After a week of travel in Mozambique, I’ve convinced myself that the country is rather stable politically. Corruption is at an average level for Africa. There’s enough of the good corruption so that stuff actually gets accomplished, without too much of the bad corruption that acts like extortion and holds back projects. The bigger question is if ENI will be willing to spend all USD $50 billion at once, or do it in phases as they get more comfortable with the government—this seems to be the general view amongst everyone.

What will happen to all the tax revenue? It’s generally accepted that a bunch of it will go offshore into bank accounts, but people generally had a very favorable view of the current government. The general perception is that the vast majority of the tax revenue will stay in the country and go towards infrastructure and education—the things that grow an economy over the long term. Quite honestly, I’m pretty bullish on Mozambique over the next few years—especially because it comes from such a low level of per capita income. If just about anything goes right, an investor stands to make huge multiples on his money. If it goes wrong, I can’t see per capita income going much under $500 and I don’t see this government stealing your assets. So how do you play it? This is the hard part.

We spent nearly a week trying to figure out our angle to get exposure to Mozambique. We visited with the stock exchange. There are two publicly traded companies, but there’s only one stock for me to choose from—the other is reserved only for Mozambican citizens. I intend to open a brokerage account and buy a few of the one I’m allowed to own. Why not? 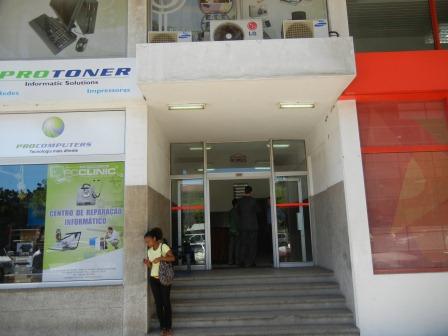 Our team entering the Mozambique Stock Exchange. It’s one room in a small office tower…..

We looked at a few private opportunities. They sounded interesting, but 30 minute pitches always do. The truth is that investing in someone else in an emerging market is difficult as the rules are very strongly in the local’s favor if there should ever be a dispute. You have to make sure that you know who you’re investing with. Fortunately, there’s an easy way to play a growing economy if the stock market isn’t an option—real estate.

Most of us are familiar with real estate in the developed world. Rents go up a few percent a year, assets are fairly valued and the whole business is about lowering your finance costs in order to increase your spread over interest expense by a few basis points each time you refinance. This is a tough business that is very prone to collapse every time the economy has a downtick—just look at how many property moguls are on the ropes here in the US. It’s not something I want to invest in. However, real estate in an emerging market is truly exciting.

Let’s start with a primer on real estate. Generally, real estate is valued either on current yield, or the yield that the property could produce if it were redeveloped. In the developed world, prime real estate yields around 5% and sometimes as low as 3%. This is a function of the perceived cash flow stability and the inflation resistance of the yields. It is also a function of the extremely low interest rate environment that currently exists. Of course, redevelopment opportunities are valued at whatever you can build on them. Now let’s look at a typical office building in Mozambique;

Let’s use some very basic numbers. The building is 2,000 meters and the tenant pays $10 a meter a month or $240,000 a year in rent. In Mozambique, interest rates are in the high teens for the politically connected, while normal businessmen pay over twenty percent. This means that most properties are valued at 20 yields (cap rates). That means that the property in question would be valued at US $1,200,000. 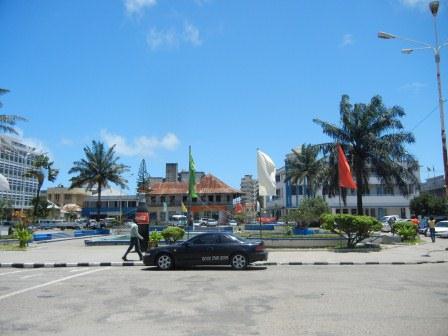 The central square in Beira to the north.

There are two ways to win with property. Rents can increase or cap rates can decline. Frequently, the two move in tandem as an economy grows and perceived risks decline. If the economy of Mozambique grew and the rent per meter increased to $20, you would get $480,000 a year in rent. If the cap rate declined to 10, that building would now be worth $4,800,000. What if the natural gas fields turned out to substantially grow the economy and rent increased to $30 a meter? Meanwhile, a flood of foreign capital substantially lowered the perceived political risk and interest rates declined to western levels. At a 6 yield, this property is now worth USD $12 million. Ten times your money isn’t bad. If you can finance part of this purchase, you can do even better. Of course, you get a nice rent check along the way, but you’re in Mozambique for upside, not a bit of rental income. Clearly, $30 a meter isn’t a crazy rent for any market. If things really boom, you can do even better. Rents in Luanda, Angola or Lagos, Nigeria are many times higher and both countries are somewhat dysfunctional energy exporters. 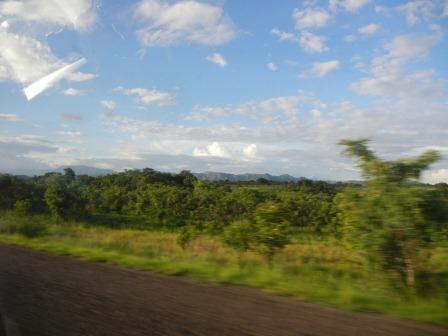 Cruising along the roads in Mozambique on the way to Zimbabwe.

Am I ready to dive into property in Mozambique? Not quite. I have my hands full with Mongolia. However, I’d probably invest in someone else’s public company if they went and did it. Here’s a few primers on what we saw. To start with, residential property sounded expensive because there’s a massive shortage of supply that is fit for all the western energy workers flooding into the country. A two bedroom apartment goes for USD $4,000 in downtown. Clearly this isn’t long term sustainable, but at a 15-cap, it’s not awful either. Fortunately, there’s a lot of raw land for sale in downtown that overlooks the water. I’d forget apartments and buy the raw land and build my own apartments for Westerners—or just use the land as a parking lot and wait for prices to appreciate. Studies continue to show that raw land has the most upside leverage to increases in property prices. I’d also look at good quality retail space. As incomes increase, disposable income will increase even more rapidly. Whoever owns the Louis Vuitton store wins! Basically, focus on the best assets in the heart of downtown, then list them as a public company, because I want to invest alongside you. This is a market to play, but you cannot do it from your home. You need to move to Mozambique and be on the ground to figure it out. It’s a shame, because by the time there’s a good way for us arm-chair investors to get involved, a third of the move will have already ended. With that, I’m off to Zimbabwe, a country that you can play from overseas.