Japan Is Getting The Wrong Type Of Inflation…

“It took Zimbabwe twenty-five years to destroy their currency. With Japan’s spirit of innovation, I believe that we can destroy ours in less than five years!!”

Mind you, I don’t speak Japanese, but last month, as I watched some remarks from the new head of the Japanese Central Bank, and I could have sworn that I actually understood Japanese for a brief moment. Then, I waited a few seconds and the speaking points passed over my Bloomberg. You know what? I might as well speak Japanese, because that’s exactly what Haruhiko Kuroda said.

Kuroda: BOJ will ease until price growth is sustainable

Kuroda: BOJ to buy the equivalent of 70% of monthly bond issuances

Kuroda: Not much room to buy more REITS at the moment

Kuroda: There is more room to purchase ETFs

Kuroda: Will enter new phase of easing in quality and quantity

Put it this way, if you own a single yen, you have to spend it and you better move fast, while your money is still worth something. If you have Yen denominated financial assets, those are just as bad. You need to get into hard assets and do it fast. Meanwhile, the central bank is trying to front run you. They’re stuck trying to hoover up ETFs because they’ve already gotten all of the REITS.  Are these people mad? Absolutely! 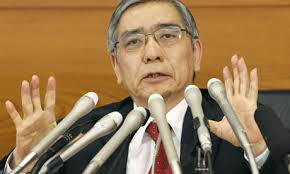 What I love about the Japanese is that they can take a concept and run with it beyond anything that seems rational—it’s what normally makes the country so enjoyable to visit. Unfortunately, this won’t work with QE. Even during the darkest days of 2008/2009, when our fed would accept any imploding CDO cubed as money good collateral, they never went out and actively bought REITs or ETFs. They may have been willing to let me shove my baseball cards through the Fed window, but they had a sense of restraint. Has the Japanese Central Bank become the world’s most dysfunctional SIV? A few months back, they were talking about trying to target 2% inflation. Now they’re like Godzilla rampaging through their whole financial system.

I remember that when I was contemplating a large Yen short (I wrote about it a few times on this site last year at around 80), I spent quite a bit of time in Japan. For me, a weaker Yen seemed like such an obvious solution to Japan’s problems. As always, I’m an inquisitive guy, and I pretty much asked every Japanese person that I met about currency exchange rates. Now, most people would discuss this sort of thing with a Japanese banker or hedge fund analyst—not me. I mostly talk to bartenders and cab drivers. They know how the economy ACTUALLY works. I remember one very clear-minded bar tender explain the situation to me.

Me: Please tell me more…

Him: You see; we import all sorts of raw commodities. We used to export stuff, but we no longer do that. Toyotas are made in America now. What do we export from Japan itself?

Him: Even if the Yen got weaker, it would take a decade before it would help to bring business back onshore. Japan designs stuff locally that is then produced in China for Japanese consumption or for re-export to other countries. A weaker Yen won’t make things competitive compared to production in China. This is a long term trend, but a weaker Yen will make everything more expensive for the Japanese engineers who design this stuff.

Look, until recently, I made very little money on my government bonds, but every year, the Yen went up and my purchasing power increased. I’m buying all sorts of stuff from overseas. The same goes for everyone else. If the Yen goes to where foreigners talk about it going in the mid 100’s, I’m going to lose half of my net worth and lose half of my ability to buy stuff. How much would gasoline cost then? What about coal, iron ore or all of the other stuff that we import. Our economy would grind to a halt.

Me: I had never thought about it this way…

Him: These foreign guys keep telling us to weaken our Yen. When it does happen, and it will—it will be a disaster. It will destroy our economy. Now let me tell you about our government. They’re bankrupt and everyone here knows they’re bankrupt. If interest rates ever go up because of inflation, they’re even more bankrupt. We need the Yen to keep strengthening—even if it hurts exporters. Once things turn, it will be violent to the downside in terms of our government finances and Japan’s standard of living.

Me: If the Yen starts to weaken, will you sell your government bonds?

Him: (laughs) I’m Japanese I cannot possibly do that… It’s not our way… It’s my duty to hold onto them… (laughs a bit more).

Those few beers were eye opening. I had many similar conversations. Everyone knew that a weak Yen was the signal that Japan was ruined. It was also a last-ditch ploy by the Japanese government that had no other options.

If you listen to the government, they want only certain assets to appreciate. Specifically, they’re targeting real estate and public equities. I guess they’ve been drinking the Bernanke Kool Aid. Property in Japan is not particularly cheap. Meanwhile, Japanese companies still trade at very low multiples to book value, but most of that book value is in cash. If you destroy their cash hoards, what’s left?

Meanwhile, I have this suspicion that Japanese companies outside of real estate won’t benefit quite as imagined. Below, I have some charts of expenses in Japan. Central bankers have decided that they want asset inflation without commodity inflation. Here are the prices of gasoline, coal, natural gas, LNG and Rice. You could choose almost any commodity priced in Yen–they’re all starting to creep higher. No one in Japan wants these products to go up. I think that this is the beginning of an experiment in money printing that will go horribly wrong.

Import price for LNG in Yen