Almost 5 months ago, Trump won the presidential race. At the time, I said Trump would herald dramatic change in how the government worked and served the American people. Along the way, regulations and taxes would be reduced and business would boom. Part of what made Trump so unique was that he wasn’t part of the Washington establishment. He couldn’t be controlled by special interests and he didn’t care about what people thought of him. Instead, he was a rich jerk who intended to bully and antagonize the forces that have stalled economic growth for the past few decades. Trump had a goal and he intended to end his presidency with dramatic economic growth—how he got there may be sloppy and would likely upset a lot of apple carts, but he’d get there.

I still believe these things. Unfortunately, it seems that Trump is running up against the ramparts of the Washington machine. The forces of obstruction intend to defend their hard won perks. Lobbyists in the Republican and Democratic camp are working together to ensure that Trump remains impotent. I guess that this shouldn’t be unexpected—Trump is part of a new party that stands for America instead of special interests.

I am confident that he will win over them or at the very least, steamroll a lot of people who are for standing in his way. However, this heralds a new stage of Trump’s rise to ascendancy and I suspect that it will lead to a level of political infighting and uncertainty that hasn’t been seen in a long time. The dreams of rapid economic growth may have to be deferred, as Trump must first fight his own party for supremacy. Only then can he tackle his agenda. 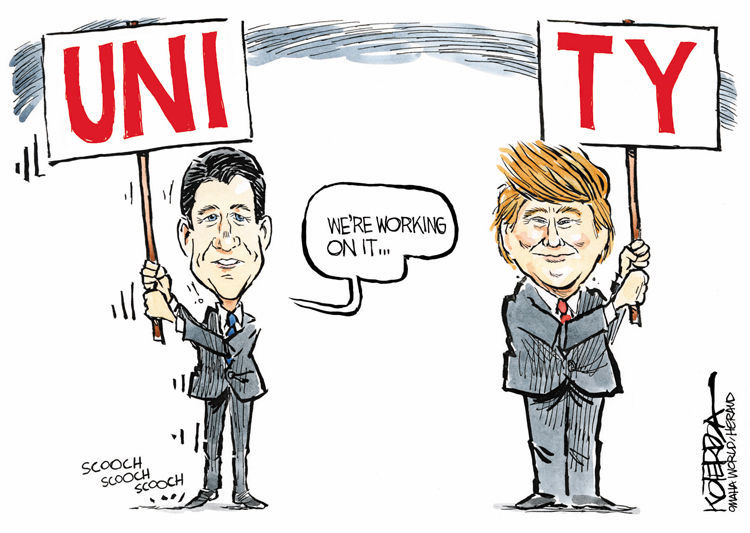 We’ve had a yuuuuge rally in equity markets based on a belief in rapid change. The talk was that Obamacare would be repealed on day 1 and tax reform would be day 2. Day 3 would be a victory lap. No one is positioned for quagmire and the dysfunctional process of lawmaking.  The market is very much ahead of itself if Trump cannot implement his reform platform rapidly. A few weeks don’t matter, a few quarters do.

Even worse, many parts of the economy are struggling—with retail and dining along with everything tied to that supply chain front and center in my mind. Remember, a whole lot of real estate is tied to these sectors and cap rates are expanding. Then there’s oil, which seems to be finding an equilibrium price at a level where most shale producers are not cash flow positive, but with sufficient cash to keep spending for many years into the future. This may weigh on the whole global oil sector. Is another credit crack-up coming at a time when rates are rising?

I don’t short equities, but I cannot think of a more pregnant time to do so. I certainly wouldn’t want any long positions here. Over the past few weeks, I’ve continued to sell shares. I have almost no longs and I still feel over-exposed. Is a yuuuuge re-adjustment to the downside imminent? Trump will prevail, but I think there will be a time to play that theme from potentially much lower levels. I’m now out of the bullish camp for the first time since Trump won. It’s been an awesome ride.