When Will The Tesla Stock Promote Finally Fail???

Most Canadian PM’s Have Crappy AIM 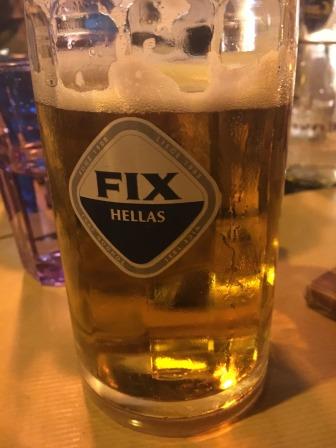 No economy can recover without a functioning banking system. Greece’s banks have been in chaos for nearly a decade, during which time roughly 45% of all deposits fled overseas, forcing the need for over 120 billion Euros of Emergency Liquidity Assistance (ELA) from the ECB while new loan issuance ground to a halt. As a group, the banks currently have stated Non-Performing Exposures (NPEs) of 50%, which would be even higher if not for the billions of loans that have already been re-structured and written off. There have now been three rounds of recapitalization where tens of billions of Euros have been tossed into the black-hole known as the Greek banking system. Despite all this fresh capital, more may be needed. If it sounds like a mess, that’s because it is.

Then again, Greek banks are priced for annihilation, with the group trading for 10-20% of tangible equity, about 5% of tangible equity plus provisions and a hair over one times pre-provision income. If there is a recovery, the banks are going to be extremely leveraged to it. Despite taking a few dozen meetings over the course of two weeks, my primary focus was the banks—as no other asset gives a similar amount of upside torque.

Nothing says oligopoly like the current Greek banking system where Net Interest Margins (NIMs) are well over 300bps. Somewhat fittingly, the word “oligopoly” comes from the Greek words ὀλίγος (olígos), meaning ‘few’, and πωλεῖν (polein), meaning ‘to sell’. During the economic crisis, over a dozen failing banks were forcibly merged to create 4 systemic banks with approximately 95% market share. Additionally, the nearly 4100 branches that existed in 2008 have been reduced to just over 2000 branches today, leading to a sizable drop in cost to income. Fortunately, high NIMs and low C/I ratios create high levels of pre-provision income—high levels of pre-provision income offsets the billions in additional provisions that the Greek banks will need to build over the next few years. Therein, lies the question; how bad are these loan books currently?

A bank is largely a black box to outside observers. Having met with the management teams of 3 of the 4 Greek systemic banks, I get the sense that they’re just as mystified from the inside as I am from the outside. According to their own internal estimates, due to difficulties with foreclosures in Greece, about a quarter of all NPEs are strategic defaulters—those that have the means to pay interest, but refuse to pay as there are no consequences. A substantial portion of the remaining NPEs relate to loans that may perform if they are restructured. How much of a haircut is needed? How far must payment terms be pushed back? Will borrowers re-default in the future? How do you haircut debt levels without incurring substantial moral hazard risk for existing borrowers who are performing? The banks all have their own opinions, their own strategies, their own hopes, but no one knows the answers to these questions. In the interim, the banks continue to increase provisions as rapidly as they generate pre-provision income.

If you look at the history of bank crises, there comes a point where despite substantial new equity capital having been raised, the banking sector is still effectively insolvent, but there is enough liquidity to survive a bank run. The regulators, trying not to precipitate a new crisis, then look the other way and let the banks use pre-provision income to slowly rebuild the equity base, while working aggressively to re-structure and write off loans. It becomes a muddle and it may take many years to come out of it, but it’s in everyone’s interest to ignore the current insolvency in order to re-build trust in the banks. Greece’s banks are at that stage of the cycle. The economy is bottoming, deposits are slowly returning, allowing the (ELA) to be repaid, NPEs are being restructured and overall NPE levels peaked out many quarters ago, new NPE formations are slowing and the banks are slowly mending their balance sheets while finally raising new capital in international debt markets. Normally, this is the stage in the cycle where you want to purchase bank shares. However, I remain skeptical about the Greek banks. 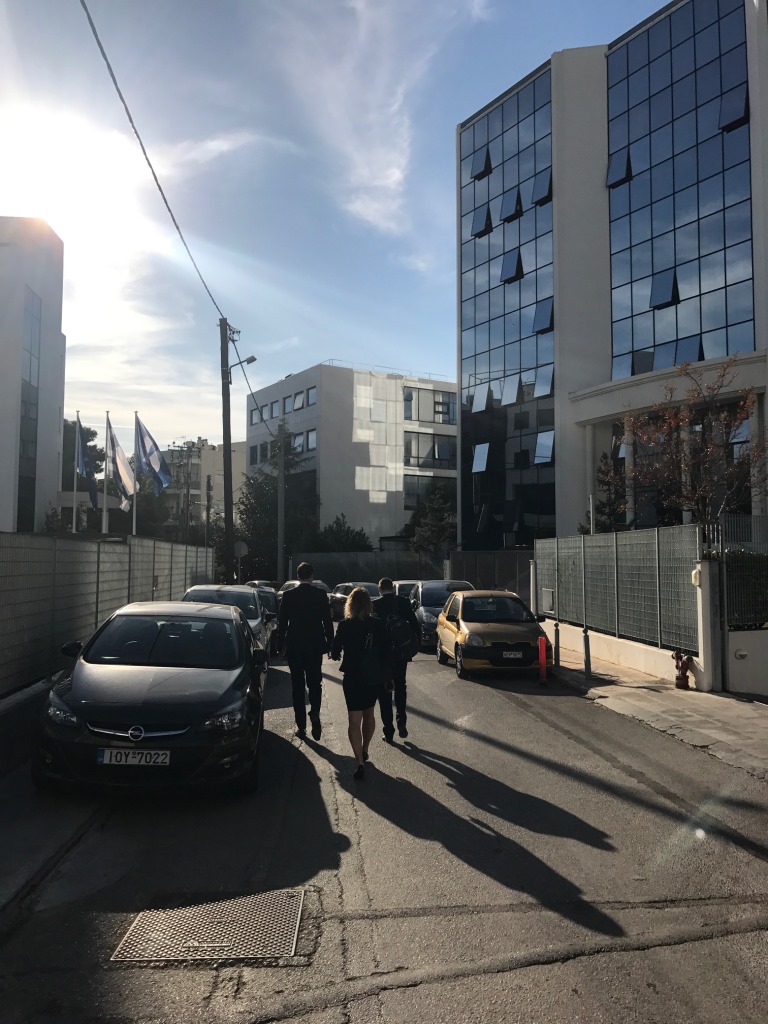 Off to yet another meeting…

In a normal situation, Greece would ignore the current bank insolvency and let the banks mend. That’s what happened in America coming out of the 2008 crisis. That’s what has happened in every other banking crisis. Unfortunately, this isn’t a normal situation. The Greeks do not make the rules here, the IMF and ECB do. What are their incentives? Do they want to heal the banks or do they want to make a final example of the Greeks to scare the other periphery countries? Do they want to go home and declare victory on a Greek recovery or do they want to overcapitalize the Greek banking system so that there can be no doubt about the need for further capital raises? The recent German elections have only heightened the difficulty in ascertaining the institutions intentions and increased the range of political machinations.

After each day of meetings, we sat around beers and played out the scenarios. There’s a lot of upside if the Germans relent and let the banks heal. There could be huge downside if additional highly dilutive capital raises are forced upon the banks. Those don’t sound like great odds. Sometimes, I’m willing to risk a total loss on an investment for sizable upside. This seems like one of those situations, but as the big bad event draws nearer, it is likely to scare investors and further pressure share prices—especially as ominous statements are made by those who wish to further punish Greece. It seems likely that there will be an even better entry point a few months into the future—it is also unlikely that the entry point will be materially worse. 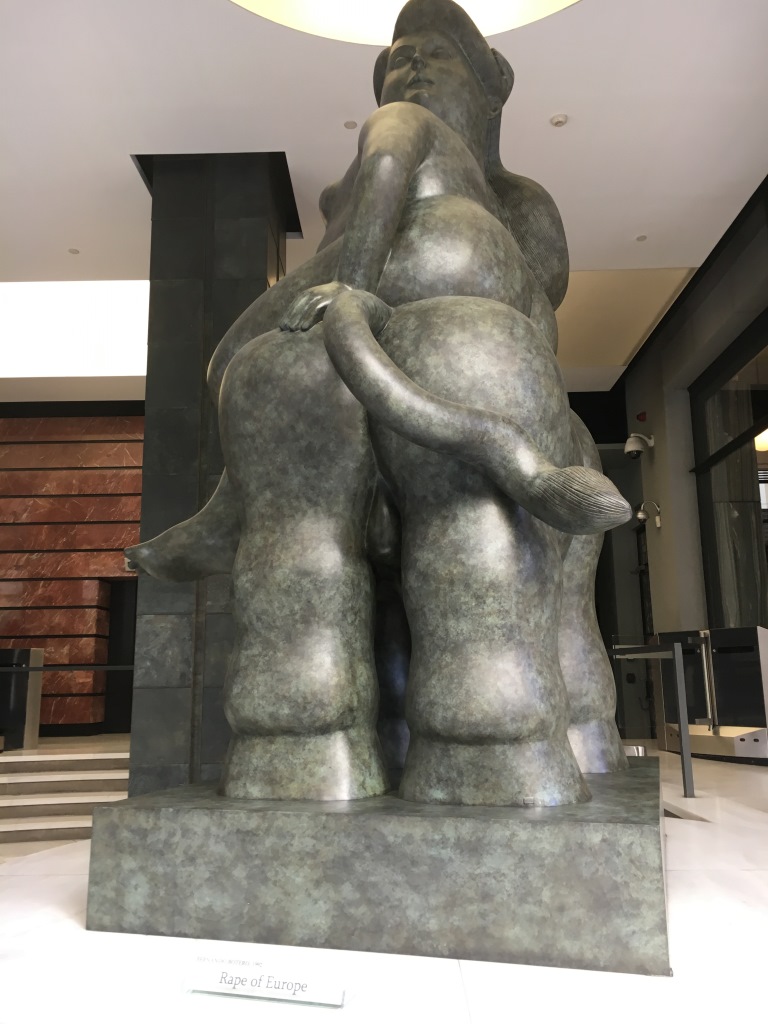 What do the banks really think about the Troika? Who knows, but every time they have a meeting with Piraeus Bank, they must walk past the “Rape of Europe” by Fernando Botero in the lobby of the HQ building–funded by bailout money. Has it helped their negotiations? Who knows, but it sure lets their regulators know what the bank thinks of them…

I went to my meetings super-bullish. I am leaving somewhat neutral. I started my trip with small starter positions, after each day of meetings, I’ve let a few more shares go, to the point where I only have token positions remaining. Guessing the next 6 months of trading action is notoriously difficult, but I do not see many scenarios where Greek banks accelerate to the upside, and I foresee many where they continue to decline leading up to the stress test. Depending on how steep the declines are, I may add back some shares or do nothing. Once we know the outcomes of the stress tests, I’ll almost certainly be a buyer of either the last and final recapitalization rounds or the rally from an oversold situation if no more capital is needed. In any case, the final bottom in Greek banks will happen sometime in 2018. Despite the black-box nature of bank balance sheets, I believe that the banks are being truthful about current NPE levels and that they’re likely over-reserving—particularly if there is a recovery that allows them to restructure outstanding loans on more advantageous terms and release current reserves. Finally, recent law changes will favor the banks in allowing out of court settlements and the initiation of online property auctions will speed up the sale of foreclosed property, while scaring strategic defaulters into becoming current on their loans. While the laws have changed, the processes have yet to begin. As we see the first auctions in December, we will learn a lot more about where properties are marked on balance sheets, compared to market prices and we will get a sense for the pace of future NPE resolutions.

Overall, I’m bullish on Greece. There are still many problems, but the economy has likely bottomed. Banks are my preferred way to express that thesis and current valuations offer an attractive entry point. I’m just worried about the need to raise additional capital. When I get clarity on that, I get clarity on when to invest. In summary, there’s no reason to do much of anything today, except stay on top of the situation.

For those who want to follow along at home or directly investing on the Athens Stock Exchange, I recommend reaching out to Nikos Katsenos nikos.katsenos@alphafinance.gr who’s been an outstanding guide over the past week. His group publishes great research on Greece, the banks and other publicly traded companies in Greece.

Disclosure: Funds that I manage are long shares of Alpha Bank and Piraeus Bank