Before George Soros focused his energies on undermining Western Society, he wrote a book detailing his theory of reflexivity. Reflexivity is the theory that the market’s own expectations about an event can help impact the actual future outcome of the event in a feedback loop of sorts. Take a mining company that needs to raise money to build a mine. Since the cost of the mine is fixed, if the share price goes up, there’s less dilution for all. The fact that a rising price, makes the shares ultimately more valuable in the real world—due to less dilution; sometimes helps to propel the share price higher in a virtuous feedback loop. If such a feedback loop starts, it tends to be self-reinforcing—at least if the stock promoters do their job correctly.

At the same time, the same dynamic can work in reverse, as we are about to witness with Tesla (TSLA – USA). While, there is some debate amongst those following the company, it seems that Tesla will have cash losses of between $3 and $6 billion this year, along with another $4 to $6 billion or so of cap-ex. Let’s call it a clean $10 billion of cash needs. Based on current burn rates, they should run out of money sometime late this summer. However, companies don’t ever run their cash to absolute zero—hence Tesla will likely need to raise capital sooner. This is where reflexivity kicks in.

With the bonds now at 87, the borrowing window is effectively closed—this then forces Tesla into the equity market. Note how when the bonds started to leak, so did the share price. This was due to investors reflexively anticipating more dilution. However, the lower the share price goes, the more dilution there will be. $10 billion is serious dilution—even with Tesla’s massively inflated share price. Hence, the lower the shares go, the less valuable they will be in the future—as it leads to more dilution—which leads people to sell their shares as the company will be worth less—which leads to more dilution in a feedback loop. 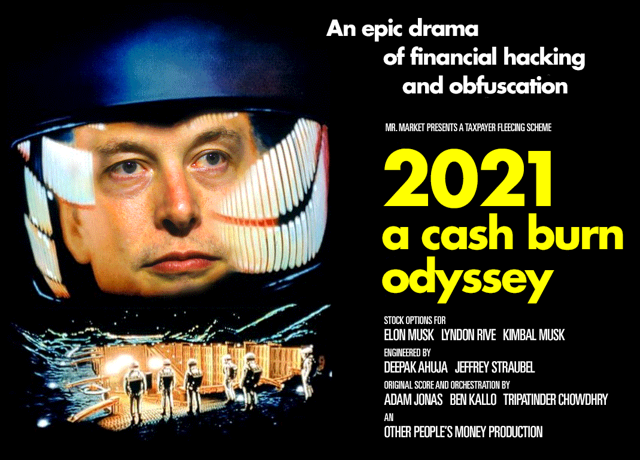 At the same time, the decline in the share price, has impacted the debt rating (ridiculously, the bonds were only able to price, as they stood behind $60 billion of equity value—which seemed to imply that equity would be issued to pay off the debt) which may ultimately impact the vendor financing terms that Tesla uses for their parts purchases—which will deplete more working capital and force more equity issuance.

When a company consumes nearly a billion in cash each month, it needs to constantly tap the debt and equity markets. If the share price goes up, access to these markets goes up and cost of capital goes down. When it goes in reverse, it can often be a rapid descent—especially if investors lose hope that the losses will ever stop. I believe that Tesla is now at that inflection point. In many ways, the lower the shares go, the worse things will get in terms of access to capital. When a blatant stock promotion ends, the unwind tends to be fast—especially when there’s lots of cash burn and debt. No wonder Musk is so focused on Mars—it may be the only place he can hide from the coming shareholder lawsuits.