Hey JOE–Where Ya Goin With That Land Over There…??

Let me start by saying that I am not an expert on oil geology; I’m not even a “sorta expert.” If you called me a novice at oil geology, I wouldn’t be offended. To prove this point, I’ll proudly admit that I guide my occasional oil investments by my “donut theory of petroleum geology.” What is the donut theory? Well, it basically says that if you own some acreage and everyone around you (creating the donut) seems to be hitting good holes, there’s a reasonably good chance that your land is also good. In fact, there’s even a chance that your land contains the jelly center of the donut. Just as importantly, there’s a rather unlikely chance that your land is worthless. If the donut theory sounds like it was dreamed up by an amateur petroleum geologist, that’s because it was. Keep this in mind as you continue to read.

About six months back, I was grabbing beers with my good friend Josh Young, who runs Bison Capital, a highly successful energy focused hedge fund. Josh was walking me through his recent success at Iron Bridge Resources (IBR – Canada), where after having amassed a sizable stake, he was able to make a number of changes at the board level, appoint himself as Chairman and ultimately replace the CEO with someone of his choosing. Along the way, he was able to sell off most of Iron Bridge’s assets for enough cash to pay off all debt and leave about $25 million for future drilling activities at their ~50,000 acres of remaining Montney land in Alberta.

Naturally, given my general distaste for “drill plays,” I listened politely and focused my attention on my beer. That said, in the following weeks, I repeatedly noted how many shares Josh continued to buy. I also noticed how a number of players in the Montney were announcing highly productive drill results on land that was adjacent to Iron Bridge’s. These players were also aggressively accumulating acres surrounding Iron Bridge’s land at prices that were at a huge premium to where Iron Bridge’s acres were currently valued by the stock market—remember that donut theory of mine? In any case, at the time, Iron Bridge had 3 producing wells and the results were pretty mediocre—implying that there wasn’t a jelly center after all—hence the reason for the depressed share price. Josh’s theory was that the Iron Bridge wells were under-producing because the wells were drilled incorrectly by former management with too short laterals, too few frac stages and too little sand per stage. I love these types of investments where someone I respect has a divergent opinion from the market on an asset, and he’s betting a lot of his own money on this opinion. Hence, I grabbed a few shares when they dropped under 50 cents, but kept the position small as it was a “drill play.”

On May 17, Iron Bridge announced rather impressive preliminary flow data for their first two wells utilizing new completion techniques and the shares popped about a dime. If that were the end of the story, I wouldn’t have put the effort into writing this.

I’ve been a full-time investor for two decades now, it’s rare to see this magnitude of insider buying

Two trading days after Iron Bridge released updated flow data, their next door neighbor, private equity owned Velvet Energy, announced an unexpected hostile cash offer for all Iron Bridge shares outstanding at 75 cents. Given the aggressiveness of a hostile offer with only minimal flow data from 2 wells drilled with newer drilling methods, I tend to think that this is an opening offer by Velvet Energy to get the guys at Iron Bridge to start negotiating in earnest. Keep in mind that Velvet Energy has drilled the most holes in this play and have the best data—hence they are more likely to have a view on where the jelly center is. At worst they think that Iron Bridge is mostly donut dough—but that’s still pretty tasty for shareholders. 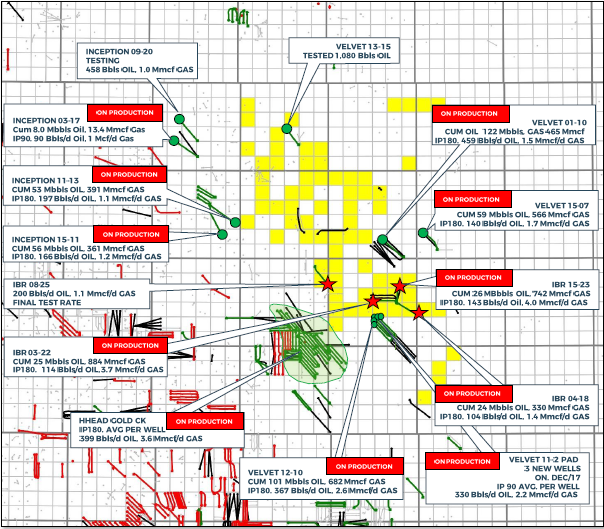 I think this plays out in one of three ways and all of them are rather immediate catalysts; the first option involves Velvet Energy raising their offer in either a friendly or hostile bid, a second option is that another bidder shows up and the fun really begins, the last option is that Iron Bridge borrows against their existing land package, which just had its value validated by a well-respected PE fund’s buyout offer and Iron Bridge continues to drill. In this third option, you are taking on some drilling risk, but we now know that the first 3 wells under-performed due to completion technique—not the rock. Even if Iron Bridge misses on a few holes going forward, I suspect that Velvet Energy’s bid remains on the table for downside protection.

For a point of reference, at 75 cents, they’re valuing Iron Bridge at around $2,300 per acre, while it is rumored that Velvet Energy has been buying prospective land near Iron Bridge for around $10,000 an acre, meaning that there is quite a good deal of head-room here if Velvet Energy comes back with an improved offer—especially as there is substantial additional value in the current existing production and other assets like Iron Bridge’s stake in Tangle Creek.

While I can drone on about the quality of the acreage, the incredible well economics, why the future flow rates will improve as the Monteney has more exploration experience, etc., it will only show how little I really know about petroleum geology. The main fact here is that there is now a floor at 75 cents, the shares are trading at 74 cents and there’s a pretty good chance that something good will happen in the near future. There are huge synergies to the acquirer when your acreage increases and I assume that PE backed Velvet Energy can do the math as well as anyone else, to realize that having more acres, early in a play’s history, will improve their returns. Most importantly, I trust Josh to do the right thing for all shareholders in the negotiations—especially as he owns over 12% of the company.

Disclosure: Funds that I manage are long shares of Iron Bridge Resources