CAD Is “Breaking Out”… 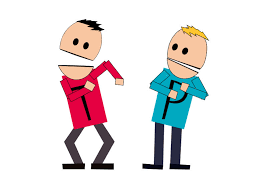 I don’t talk much about currencies on this site, but that doesn’t mean I don’t “play” them. As an equity market participant, I have to figure out which currencies I want my accounts denominated in. The mere fact that your account is denominated in USD on day 1, is the tacit admission that you have a structural view on USD. For this reason, I often hold a basket of currencies against my equity positions. At the same time, I don’t trade these currencies often (besides the occasional re-weighting). This is because for most of the time, currencies don’t move—until they do. When they do, they go FAST.

For a guy who claims no great knowledge of currency trading, I’ve made a surprising amount of money on currencies over the years. This is because I don’t take leveraged positions (giving me the ability to hold on) and I try not to overthink things. I have very few rules of currency investing and it mostly comes down to a simple view of “is it cheap to get a beer and some food there.” I know, it’s sort of embarrassing to allocate millions of dollars based on where it’s cheap to enjoy myself, but it has worked remarkably well over time—mainly because I’m patient. This is because currencies naturally adjust based on purchasing power—unless you’re somewhere that’s “screwed up.” Those places are ALWAYS cheap and the currencies ALWAYS depreciate—though you tend to earn enough in interest to offset the rate of depreciation.

The other rule I have is not to fight the tape. Currencies tend to trend for years at a time. Hence, thinking it’s cheap or expensive is only the first step. I wait for some sign that the current trend is reversing before I get involved. See previous articles about JPY, CNY, EUR for how this is done. 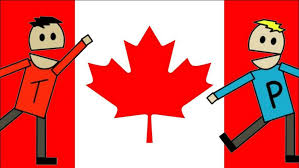 With this mental tangent out of the way, let’s talk about the Canadian Dollar (CAD). I’ve been visiting Canada all my life. With the CAD at 75, it’s a pretty affordable place—bordering on outright cheap if you aren’t in Vancouver or downtown Toronto. For the better part of the past year, all sorts of bad news has been hitting Canada. Oil is down, the arrest of Huawei’s CFO has cut off Chinese money laundering (which seems to make up a surprising percentage of Canada’s economy these days) and Trump just trashed new NAFTA (USMCA). With all this negative news, you’d think that the CAD would be weak. Nope—it’s getting bid. When a currency does the opposite of what it’s supposed to, it gets my interest—especially when it’s cheap. I’ve owned CAD as part of my basket for the past few years as it built something of a base. My basis is right around 75. Today the chart “broke out.”

I’m a strong believer that drawing lines on your screen is simply voodoo. At the same time, in the FX world, trillions of dollars are managed by drawing lines and most of these “artists” draw lines at roughly the same spot. Here’s my best try. 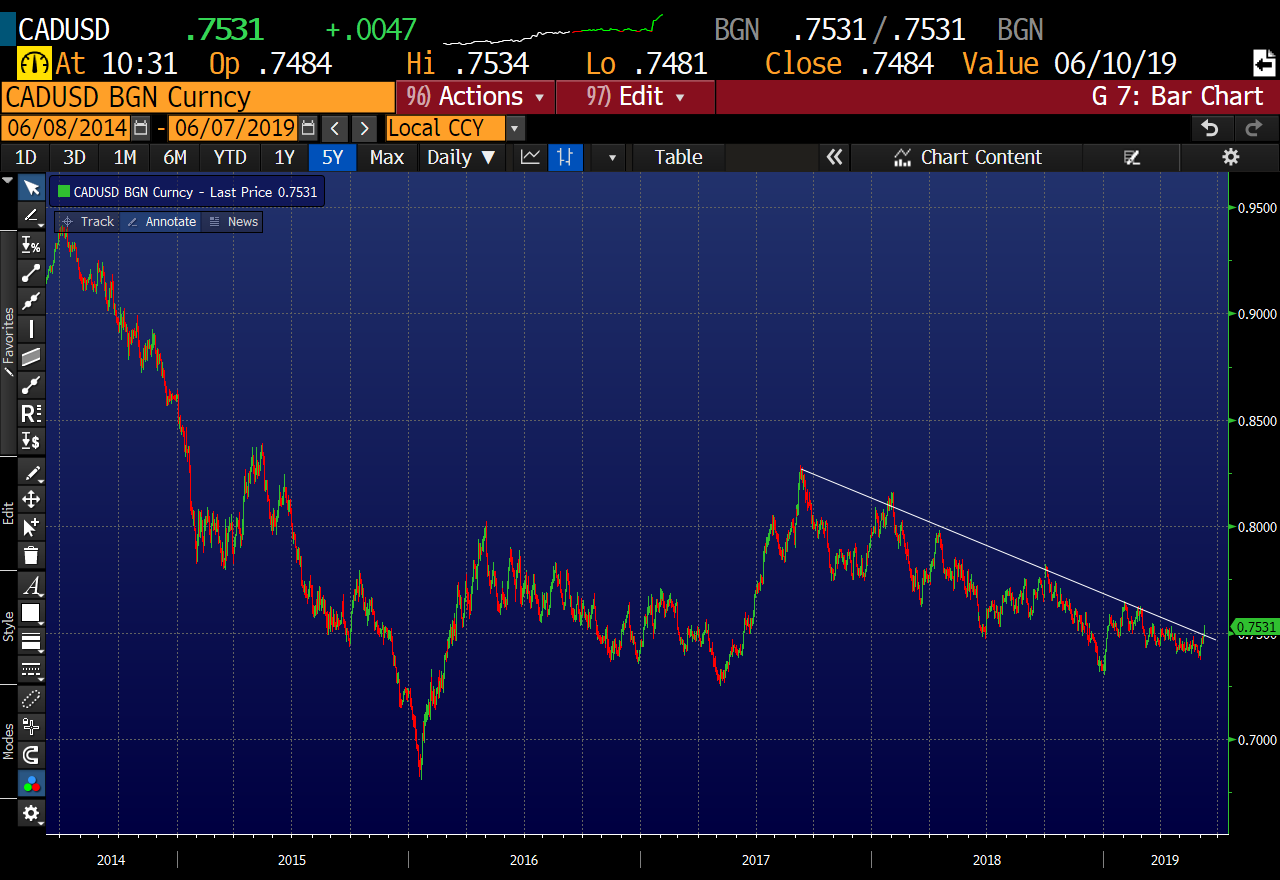 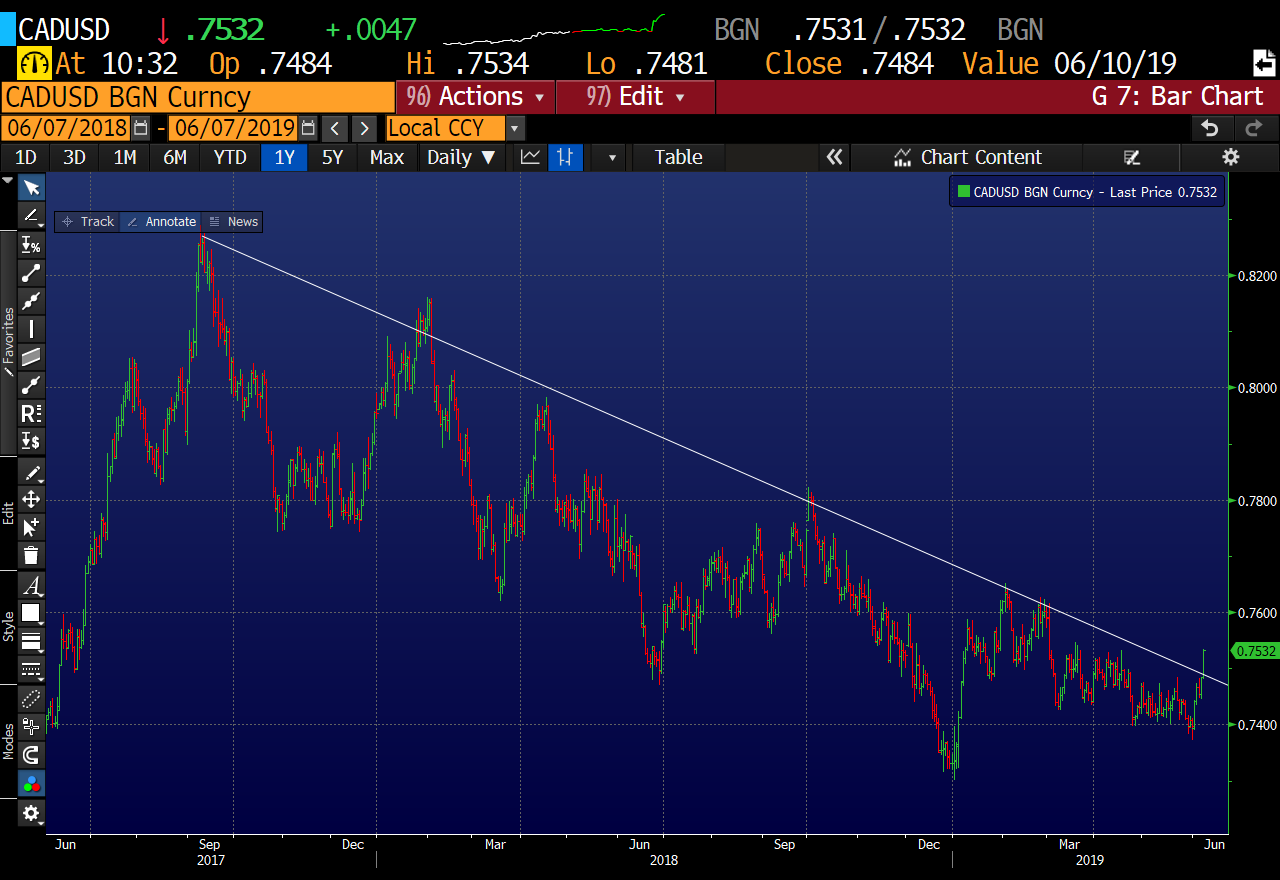 I zoomed in so you can see the “break out”

Needless to say, after doing a whole lot of nothing for the past few years, CAD is “breaking out” during a time when the news flow is all negative. I added a whole lot more last night at just under 75. Caveat Emptor.

Disclosure: Funds that I control are long CAD