Over the past week, I have taken my bullishness on tankers from level 10 to 11. It started with the Saudis busting out of the cartel formerly known as OPEC+ in order to dump oil and crush US shale, but it has progressed far beyond that as various US cities went into lock-down. Fair warning, I’m going to generalize, I’m going to round some numbers and if you’re an empirical purist, you’ll probably be offended.

In big round numbers, the world produces 100 million barrels of oil per day (bbl/d) and consumes roughly the same. As a result, supply and demand are usually balanced to within a few hundred thousand bbl/d at any given time. In fact, we have extreme price volatility when the balance is off by much more than that. The market was roughly balanced at the start of this year, until COVID-19 arrived in China. When the Chinese went into quarantine, their oil demand collapsed by roughly 25% and stayed suppressed for roughly two months. Even today, two months later, demand is still not back to pre-flu levels. With the rest of the world now experiencing COVID-19, I would expect global oil demand to also decline by a similar 25% in affected regions, offset by the partial recovery in China. Let’s assume that global demand is going to be off by 20% or 20 million bbl/d for the next 50 days (yeah, I’m probably wrong to within a few million bbl/d. Deal with it). In addition, I expect the Saudis along with their former friends in OPEC+ to dump an incremental few million bbl/d, hence maybe my 20 million bbl/d isn’t so far off after all. Let’s call it a total of 20 million bbl/d of surplus oil for 50 days. We’re now talking about 1 billion surplus barrels (give or take a bit). Transposing the slow pace of the Chinese recovery to the rest of the world, let’s assume that the global surplus shrinks to 10 million bbl/d after 50 days and stays at that level for another 100 days. That’s another billion barrels and together, you have 2 billion barrels of surplus oil supply over the next 150 days (5 months) that are dumped on the market. Where will it all go?

Last week, Trump bragged that we’ll fill the Strategic Petroleum Reserve (SPR) “to the top.” Sounds impressive right? Well, the richest nation on earth only needs 75 million barrels to fill the SPR. Do you see the magnitude of the problem? 2 billion barrels is a whole lot of oil. For the past decade, the world has managed with an inventory of roughly 2.5 to 3 billion barrels of oil. As land storage rapidly fills up, there literally isn’t anywhere to put this oil, except tankers. 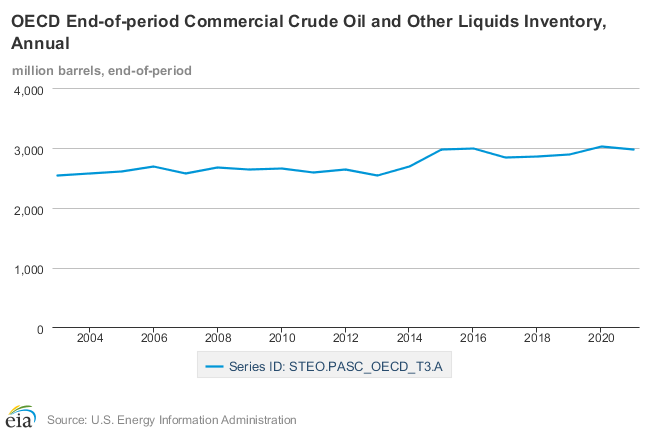 If you knew billions more barrels were coming at you, why would you ever buy a barrel today, unless you intended to use it today? In fact, you’d almost be assured that oil would be cheaper tomorrow if you waited. So, how do you incentivize someone to buy oil today? You take the price down, way down, down so low that a trading house is willing to store it in the hope that they can sell it at some point in the future. Trading houses tend to make massive leveraged bets, they don’t want those bets to be at the whim of the oil price, they want to lock those bets in as sure things. Fortunately, there’s a reasonably liquid futures curve. Look at it today; you can buy physical Brent Crude today and lock in the price 12 months into the future and guarantee yourself an $11 per barrel profit. It’s a great return, except you have to pay someone to store it. Here’s where my tankers come in.

Interest rates are effectively zero today, so you have no finance costs, your only real cost is renting the tanker. Let’s say you put away 2 million barrels (the size of a VLCC) for a year and shorted futures to lock in a $22 million profit (2 million barrels at $11 each). How much of that profit do you think you have to share with the owner of the VLCC? If you guessed it was most of that profit, you’re qualified to work for Vitol. Remember, the guys with the tankers get to shop these against multiple firms who can take a risk-free position and leverage it almost infinitely. Say you give the traders $2 million and keep $20 million—well, that’s an insane profit. The sort of tanker that would be chartered for storage is likely only worth about $25 million and has less than $5 million of equity into it. If you own this tanker, you just locked in a four-times return on your equity in just one year. Pretty nice! Now, traders tend to get closer to the front of the curve. You make $8 for the first 6 months of storage and the 3-month curve is even steeper at $5. Imagine earning $5 per barrel, four times in a year? You make $20 in contango. As you can imagine, trading houses want to lock in the tanker and go right into the teeth of the contango. Let’s not worry ourselves with how much Vitol will make—they’re big boys and can take care of themselves. What matters is what the tanker owner makes. Let’s just say he’s making so much he doesn’t mind locking up his vessel for a very long time.

The thing is, we’re going to need hundreds of tankers to store the 2 billion barrels of excess supply. But wait, there’s more!! Think about the oil curve. If oil is in the $20s today, no one is spending cap-ex on drilling. Where do you think production will be in 2023? What about 2025? I bet it’s off by millions of barrels, maybe even tens of millions. Once the margin calls are done, where do you think 2023 oil futures will trade? $50? $75? $100? Have you seen how much stimulus they’re throwing at the global economy each day? It will take some time, but demand will come back with a vengeance. I don’t know where 2023 oil will trade, but I guarantee you it will be VERY steep to the front month. This isn’t a few month contango thing, this is going to last for a while as all that inventory keeps the front of the curve heavy. How long? A 2-billion-barrel surplus getting worked off at a 5 million daily deficit will take 400 days to work off. Meanwhile, the storage cost is going to be astronomical. The front month will be on the floor and deferred months will be into the sky. This will draw in more and more tankers playing every part of the curve with all that free Federal Reserve bailout money.

Now, let’s say that the oldest few hundred VLCC tankers go into storage trades. That seriously crimps the global fleet supply of roughly 800 actively transporting crude. When 26 COSCO tankers were sanctioned last fall, rates went to 10-year highs. What happens when a few hundred leave the transport fleet? Well, rates go to Pluto. At current daily charter rates of around $200,000 to transport oil, a VLCC earns $70 million, which is a stunning return on a 10-year vessel worth about $50 million. Even better, the owner likely only has about $20 million of equity invested. This means that at current rates, the owner makes 3.5 times his money each year. Ironically, despite all of this going on, most tanker stocks trade at roughly half of NAV. This means that they’re earning somewhere around 5 to 8 times their market caps in a year. By the way, this isn’t theoretical. There have been almost 100 fixings in the past 10 days and almost all are north of $150,000. There have been dozens of time charters for storage. It’s happening. Even if rates back off to $100,000, tanker companies will earn unfathomable returns. 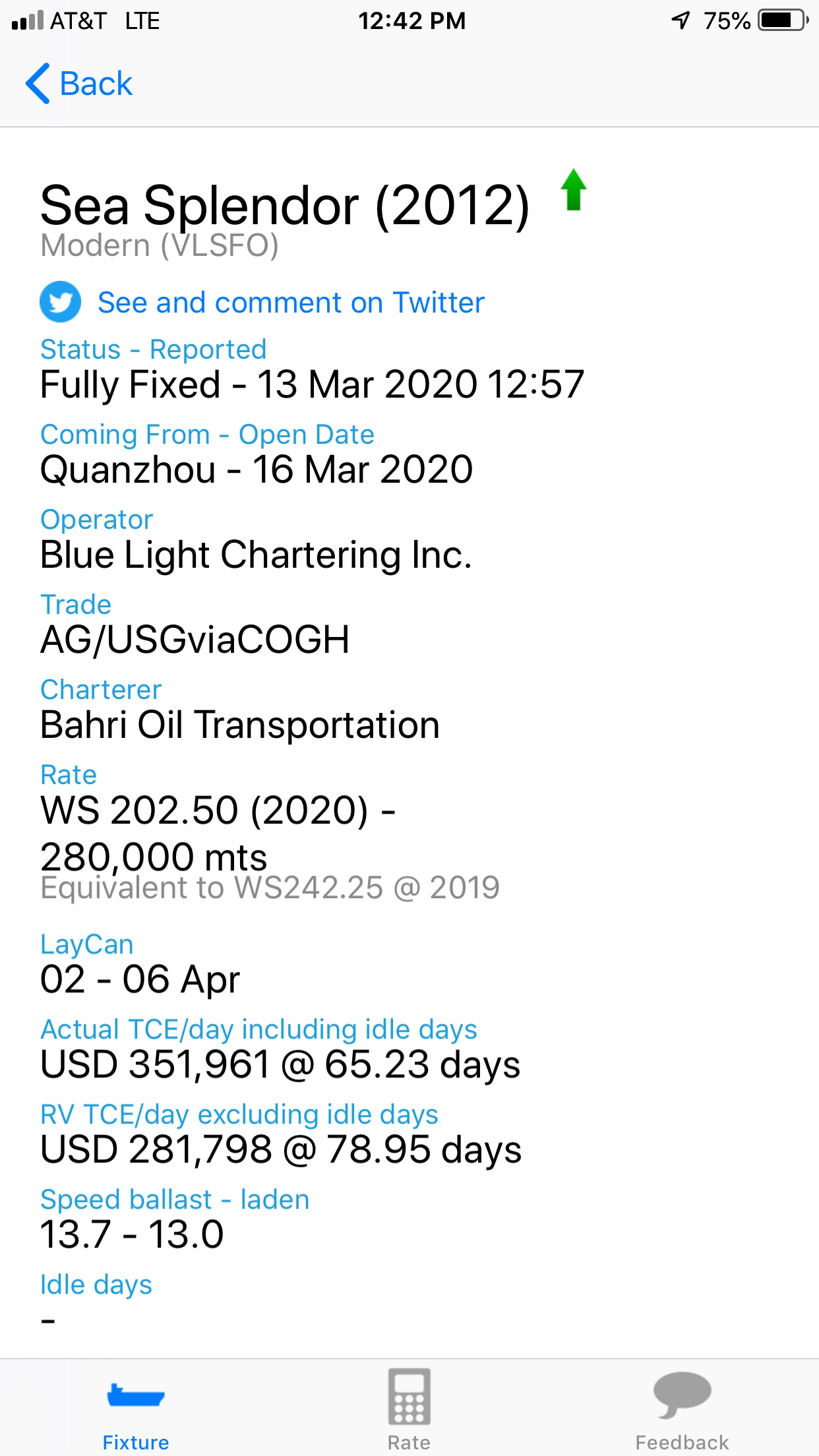 I have followed tankers for two decades now. Ever since 2009, every spike was short-lived as there was incessant oversupply. This one is truly different. No national leader wants to end lock-down too soon and then have people die. Instead, the incentive is to be as aggressive as possible with the lock-down, strangle the economy and look like they’re doing something to protect people from something terrifying that most people don’t understand. Which politician wouldn’t want to stand up there on national TV, flanked by important sounding people and talk about what they’re doing to protect you, while giving you free stimulus money? It’s the greatest election campaign ever. Even Trump is getting in on the act and we all know that he’s singularly focused on the stock market. What if global demand drops 30 or 40% over the next few months? What if we have 5 billion barrels of surplus crude? I don’t know how to quantify all of this, but there is a whole lot of blue-sky in terms of how badly politicians can screw up our economy and how badly demand could collapse. What if the Contango is $30 because front-month goes into the teens? I can build you scenarios where modern tankers earn $300,000 or $500,000 a day and it stays there for two years. I’ve seen quite a few fixings at the $300,000 level in the past week—clearly the guys chartering vessels think this is the new norm.

Then again, I could also argue that politicians realize that strangling the economy is a mistake and we only put away a few hundred million barrels. I try and build conservative models and tend to think rates bounce around a lot with average rates that are lower than today’s levels. Then again, as storage absorbs vessels, I struggle to understand how rates decline materially if charterers need tonnage. 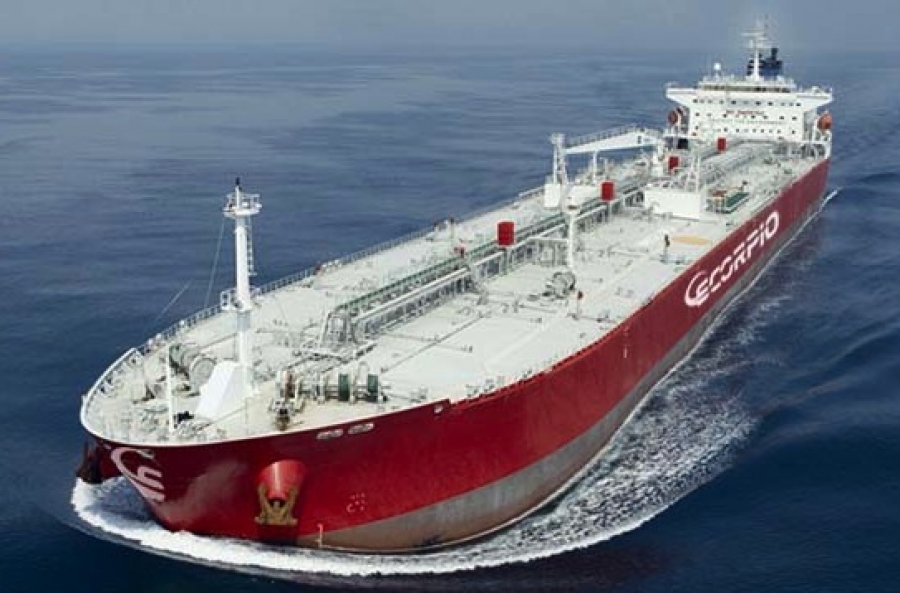 Last week, I noted that tankers “may be the greatest trade I’ve ever seen in my entire investing career.” Now I’m ready to go on the record and say there won’t be a better one in decades. As the great cities of the world go into lock-down and oil demand collapses, someone has to store it. I recently put more of my money behind this and booked all of my Altisource Portfolio Solutions (ASPS – USA) and Uranium Participation Corp (U – Canada) to add more tankers. I think both ASPS and U have strong upside, but nothing has the sort of upside that tankers have. There are only a few moments in investing where you can bet it big with unusually low risk—this is the best I’ve ever seen and I have to fund it somehow—even if it means taking losses on some of my favorite positions.

I know what the obvious next question is; what if the Saudis stop flooding the market? My response is, “who cares?” We’re all on lock-down. I’m watching out my window. Car traffic is down by half. Cruises aren’t going past my pool deck as frequently and air travel is down dramatically. We’ll eventually beat this flu, but by then, there will be billions of excess barrels to deal with. The Saudis are a rounding error in all of this. Our government is saying this could go on for 18 months or longer. Are you kidding? Where will all the oil go? This is the time to be greedy on tankers.