Over the past few months, I’ve been writing a lot about Event-Driven strategies, mainly because I see an unusual amount of opportunity there. That said, Event-Driven remains a small piece of my book. The core of what I do is inflection investing—finding a theme that’s inflecting better and get there before anyone else realizes it.

With that preamble out of the way, today the government announced that seasonally adjusted new home sales for August hit 1.011 million. For those keeping score at home, this is the highest that this figure has been since 2006 and up 43% from last year. 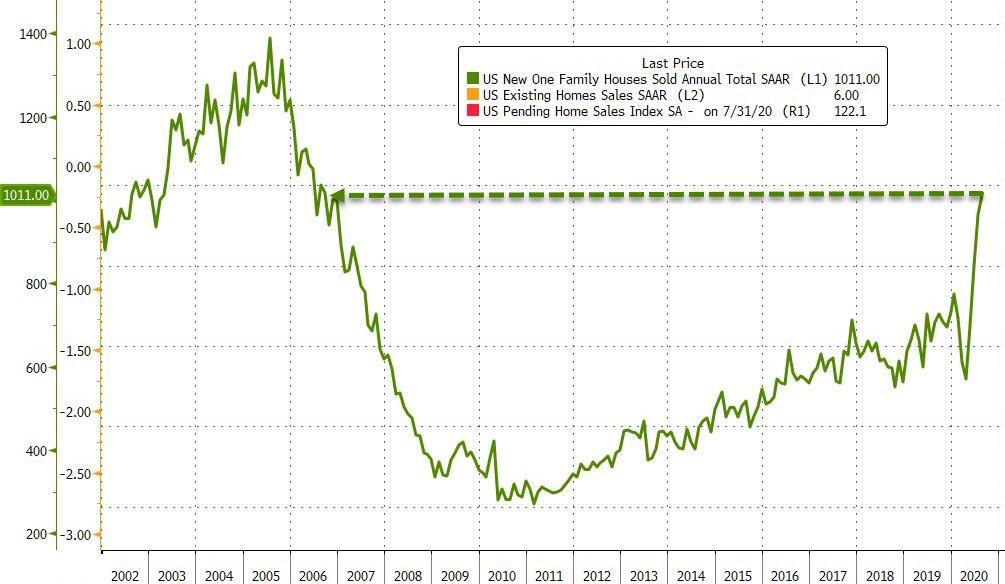 Of course, that figure is backwards looking. Fortunately, two prominent home builders announced results this week giving us some added color on future trends. I’ll let them tell the story;

Beazer Homes (BZH – USA) today announced that, based on preliminary operating results, net new orders for the first two months of its fiscal fourth quarter were up 37% year-over-year with a 26% increase in July and a 48% increase in August. This performance was primarily related to a higher pace, as sales per community per month rose to 4.4 from 3.0 in the previous year.

“Housing market conditions strengthened during the third quarter, fueled by the combination of historically low mortgage interest rates, a limited supply of resale inventory and consumers’ desire to own a single-family home,” continued Mezger. “Reflecting this strength, our net orders expanded 27% year over year, with growth in each of our four regions. We achieved a monthly absorption pace that accelerated to 5.9 orders per community, an increase of 36%, while we also increased prices in most of our communities. We believe that our Built-to-Order model is a key factor driving our sales pace, with this quarter’s results underscoring the robust demand for the choice and personalization we offer to our homebuyers….”

The Company’s net order growth accelerated during the quarter, with monthly net orders up 11% in June, 23% in July and 50% in August. The Company’s cancellation rate as a percentage of gross orders for the quarter improved to 17% from 20%.

Company-wide, net orders per community averaged 5.9 per month, compared to 4.3.

I hope you get the point; things in housing are good and getting better. When it comes to inflection investing, if you cannot answer the “why,” you’re just a slave to monthly data. With that in mind, what’s driving sales growth? I think it is the confluence of many trends, from generationally low interest rates and affordability pressures in cities, to a decade of below-trend housing construction caused by Millennials postponing family creation until now. However, you could have said the same thing a few years ago and not made money. The real catalyst is the sudden panic migration from cities.

Remember when cities were awesome back in January?? They were full of great food and bars—all your friends were around and there was always something interesting going on. Then COVID hit and the restaurants closed down and they won’t allow you into the bars. A 600-foot studio apartment is fine if you never spend any time there. If there’s nowhere else to go, a studio feels like a prison. Even worse, everyone is now doing some version of Work From Home (WFH), so those four walls are all you see each day. Suddenly, a home sounds attractive. However, in my mind the real catalyst isn’t COVID, it’s the riots.

I don’t know why Democrats think that burning their cities is going to bring about social justice, but lots of things suddenly make little sense to me. Rather than go into politics, it’s useful to remember that increased crime, arson and tear-gas don’t make things enjoyable in a city—especially when your rent is eating up most of your paycheck. As a result, there’s been a massive flight from cities by those who can afford to leave. As these macro and social trends converge, there’s been a huge increase in demand for single family and multi-family property in the suburbs and exurbs—particularly in more affordable parts of the country.

As many of us have learned, homebuilding is a mediocre business at best. Instead, I’m playing this trend through the suppliers to single-family and multi-family homebuilders. These suppliers have had dramatic consolidation during the decade-long bear market in housing and as a result have some pricing power in what should be a commodity industry.

Let’s look at Cornerstone Building Brands (CNR – USA). CNR is one of the largest US players in multiple verticals including; vinyl windows, doors, siding, trim, gutters, shutters, stone façade and plenty of others—essentially the components of a home. While they also have a commercial business that has been suffering a bit lately, warehouses and medical have been white hot.

Normally, I’d think of these component manufacturers as mediocre sorts of businesses, but when you run the numbers, over the past year, CNR has earned a low-20% adjusted return on tangible assets. Assuming that they can achieve the planned merger synergies (CNR is a roll-up of various businesses), the return would likely be in the mid-20% (indicative of an unusually good business). Now, if I’m right about the macro and both revenue and margins increase, why couldn’t they earn around 30% on tangible capital. Throw a few turns of debt on that and you’re earning pretty stunning returns on equity for many years into the future, as I tend to think this trend towards the suburbs has multi-year legs.

Of course, inflection investing is all about the price you pay in order to see the upside. In this case, the company had $215 million of free cash flow to equity over the past 12 months and that includes two weak quarters with COVID—not so bad when you consider that the market cap is around $900 million—though the valuation is much more stretched on an enterprise value basis.

When I look at inflections, I often gravitate towards the more financially and operationally leveraged players once it is clear that the inflection is happening. While you take on more risk if you get it wrong, you also take on a whole lot more upside. With that in mind, CNR has a lot of debt, some may even say it has too much debt—a legacy of multiple acquisitions. As a result, the risks are elevated here. Then again, a quick look at insider buying (they’ve bought millions worth of stock when a lot less was going right), ought to tell you that when they talk about de-leveraging, they’re probably serious about it.

Insider transactions over the past 2 years.

I had planned to write about CNR and a few others earlier this summer—then they all ran like they stole something and I chose to hold off saying anything. With the recent pullback into the low-$7s, I’ve added to my already chunky exposure and figured I might as well flag it for those who care—especially as housing is my largest sector exposure.

Disclosure: Funds that I control are long shares of CNR and short CNR puts.