On Getting Stolen From…

Let me throw this out there; the investing game is mind-numbingly easy. You buy good businesses for less than fair value. Sure, we can all argue about fair value. There are always surprises in the future trajectory of a business. This game has some wrinkles and drama, but at the most basic level, it’s easy. In fact, done correctly, it only involves a handful of decisions each year.

If it’s so easy, why aren’t I wealthier? It’s because I’ve tried to complicate things from time to time and made some very expensive mistakes along the way. Look, I’m human. Fortunately, I learn fast and usually avoid making the same mistake twice. I like to joke that my career is nothing more than two decades of finding creative ways to lose money. That’s not to say that the markets haven’t been good to me—the markets have been amazingly rewarding to me.

When I look back on my career thus far, I don’t dwell too much on the winners—remember how I said buying something cheap is easy? Nor do I think about the ones that didn’t go anywhere, while tying up my precious capital. Instead, I repeatedly relive my most expensive mistakes. Over a decade later, I still ask myself how could I have been so foolish to keep shorting more Research in Motion (currently BB – USA) as it went parabolic? On one hand, I was right about the iPhone displacing the Blackberry. On the other hand, it didn’t matter because I was a year early. I was stubborn and it was my most expensive loss ever. (Thankfully I took the loss when I did, as it more than doubled from where I eventually covered my short).

Over the years, I have learned that it is never the boring compounder that really hurts you—it’s the leverage, the complexity and the shorting that gets you—especially the shorting. There’s a reason that I rarely ever short these days. I even penned a piece on the topic; Stop Shorting “Project Zimbabwe” as I wanted to warn my friends that the market is suddenly quite different from what we were all accustomed to. Having been run over in the past, I have a reasonably good perspective on when other situations can run people over—heck, I sometimes even join in the fun on the long side. Looking back to Tesla (TSLA – USA), it was obvious to get out when I did. I feel bad that so many friends didn’t listen. I feel even worse that I didn’t reverse long—it was that obvious. 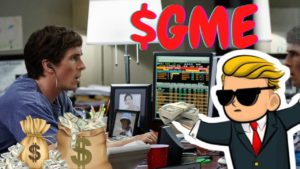 I bring this all up while watching the drama at GameStop (GME – USA). Let me start by saying that I don’t care how confident you are that a company will go to zero, when there are more shares short than outstanding, you’re just asking for people to play games with you. When word gets out that a few large funds are individually short 8-figure positions, you know that someone will try for the kill-shot. r/WallStreetBets gets the attention, but there are killer whales out there, silently doing the real work. There’s a price where these shorts will puke it up and the market has a funny way of finding that price.

I don’t want to focus too much on GameStop. I had an Event-Driven long position because July 4th is always more fun when you buy your own fireworks. I tossed it at $92.50 premarket for a nice score. I’ve also written a pile of puts as implied volatility has experienced a supernova event, but this is still boring GameStop after all. However, this article isn’t about what will happen at GME; my guess is as good as yours. Rather, I want to point out that you have to be a special sort of stupid to stay short when there are more shares short than outstanding. Hubris is dangerous in the investing game. Shorts are extra dangerous. There are landmines everywhere. I don’t care how small the position is, when a short position goes up 25-fold in six months, it’s going to hurt badly. If you didn’t realize that was a risk, you really weren’t paying attention.

Remember how easy this game is? Buy cheap stocks and go to the beach. I’d be a whole lot wealthier today if I had done more of that when I was younger. Instead, we all like to add complexity because we think we’re smarter than the market. We like to add leverage because 50% more of a good thing tends to make it better. We often forget that one big mistake on the short side can bankrupt you. The first rule of investing is to never put yourself in a position where you can lose it all. Having been burnt in the past, I focus inordinate attention today on how I can get hurt; not on where I can make the most money—that part is easy. I like to think that the shift in my focus means that I have matured as an investor. Trust me, I know how frustrating it is to dig out of a self-created hole. As a result, I’m amazed that so many people blindly dismiss the risks out there. That is just asking for trouble.

“Project Zimbabwe” is a brave new world for everyone. Please stop, review your portfolio, stress test everything, think through the implications of 100-sigma events happening each day. No one is ready for what’s about to happen, as it’s mostly right-tail risk—except if you have a financialized book, in which case a move in interest rates may detonate your left tail first. As others blow up their books, your version of complexity may end up as collateral damage. Stop. Think it through. Be extra careful. No one expected GameStop to become a momentum stock. What else does no one expect? What else can happen? Be careful out there. Stop being stupid. A large fund with a great track record, is not immune to these rules—if anything, their position sizing makes them more vulnerable. A lot of rules that we’ve all taken for granted are about to be re-written. NEVER put yourself in a position where you can lose it all. 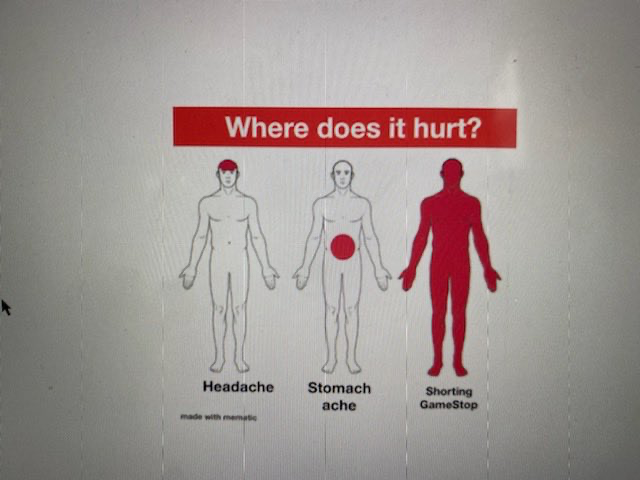 The shorts at GameStop are probably thinking that Friday was the blow-off top. Instead, they should be asking themselves, “was Friday a base-camp on the way to the real blow-off top?” Remember, in today’s world, any asset can trade at any price. The price of oil went negative. No one thought that was possible, yet trillions of bonds at negative yields should have been a warning that the old rules no longer applied. I want to repeat again for the third time; NEVER put yourself in a position where you can lose it all. The rules for “Project Zimbabwe” are being re-written and they will be full of surprises. In particular, be careful on the short side. GameStop isn’t the first supernova squeeze of this decade and it surely won’t be the last.

Disclosure: Funds that I control are short GME puts of various strikes and maturities.